A pair of rare sealed stereo surf LPs – Surf Age by Jerry Cole and Summer Surf by Dick Dale. Each includes a bonus single with two tracks from the other LP!

Both LPs are the rare stereo versions.  Both LPs are still sealed.  Each LP includes a rare bonus single that promotes two tracks from the other artist’s album.

These two albums were released at the same time by Capitol Records and have consecutive catalog numbers (ST-2111/ST-2112.)

About Jerry Cole’s Surf Age: This copy of Surf Age is an original 1964 U.S. pressing on the Capitol label.  This LP includes the bonus single “Spanish Kiss”/”Thunder Wave” by Dick Dale and His Del-Tones.

The wrap is fully intact with no rips, tears, or holes, aside from the breathe holes in the wrap.  A price sticker (not shown) is still attached to the shrink wrap.

There are two tiny corner dents, but aside from that, this LP is nearly perfect.

About Dick Dale’s Summer Surf: This copy of Summer Surf is an original 1964 U.S. pressing on the Capitol label.  This LP includes the bonus single “Racing Waves”/”Movin’ Surf” by Jerry Cole and His Spacemen.

The wrap is fully intact with no rips, tears, or holes, aside from a tiny pinhole in the lower right hand corner.

Background (Surf Age): Released in 1964, Surf Age was one of the few albums by Jerry Cole that actually had his name on the cover.  Cole was a member of the Wrecking Crew, a group of session musicians that performed on hundreds of albums by a variety of artists in the 1960s, and when Cole wasn’t doing that, he was recording several dozen albums of his own (under a variety of names) as well as appearing as a member of the house band on the 1964-1965 U.S. TV series Shindig.

Jerry Cole was a first-rank studio guitarist who, like many members of the Wrecking Crew, cut a few instrumental albums under his own name during the 1960s when he wasn’t busy playing hot licks on other folks’ records. … this is a blowing session where a bunch of talented studio cats have some fun knocking out rock & roll that’s polished and frantic at the same time, and on that score, this album delivers the goods. Cole’s guitar work lacks the feral intensity of Dick Dale, but he’s an agile picker and his tone choices are excellent, ranging from the bright cleanliness of the title track to the reverb-soaked “Deep Surf” and the raunchy fuzz on “One Color Blues.” And this album is a testament to the effortless skill and enthusiasm of the great Los Angeles session players of the ’60s, who could knock out records this good as easily as some kid at McDonald’s flips a hamburger. If you dig vintage surf sounds or classic-era instrumental rock, then Surf Age is right up your alley.

Background (Summer Surf): Released in 1964, Summer Surf was the fifth album by Dick Dale and his final LP with the Del-Tones.

On his fourth album for Capitol Records, 1964’s Summer Surf, Dick Dale seemed to be aiming for a glossier and more elaborate sound, and the production shows the occasional influences of Phil Spector and Brian Wilson, then the reigning titans of West Coast studiocraft. With banks of vocal choruses on several tunes, additional percussion fancying up the arrangements, and no fear of horns and keyboards, Summer Surf was the most polished Dick Dale set to date, and on tunes like the Spanish guitar exercise “Spanish Kiss” and the Hebrew-flavored “The Star (Of David),” Dale’s ambitions paid off — although not exactly rock & roll, they are compelling and absorbing instrumentals that find the guitarist expanding his boundaries.

Background on this set: In 1964, Capitol Records came up with the clever idea of releasing four surf albums by four different artists and having each album include a bonus single from one of the other three albums in order to cross-promote sales.

These albums had covers that were designed to store the single in a pocket on the front side that also displayed the title of the 45.

Surf Route 101 by The Super Stocks included the single “Doin’ the Surfink”/”Finksville U.S.A” by Mr. Gasser & the Weirdos

Surfink! by Mr. Gasser & the Weirdos included the single “Santa Barbara”/”Midnight Run” by the Super Stocks.

None of the four albums sold well and all are hard to find today with the bonus singles intact.

You can listen to Jerry Cole’s “Racing Waves” here:

You can listen to Dick Dale’s “Thunder Wave” here: 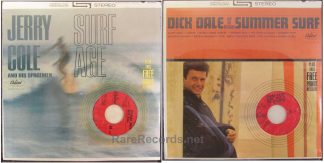