Note: Due to COVID-19-related supply issues, particularly in the United States, we’re currently buying more records from our Japanese suppliers than usual.  It puts our inventory a bit out of balance, but then again, we’re turning up some pretty amazing Japanese records at the moment.

You may have noticed that we have a lot of Japanese records in stock here at RareRecords.net. If you are unfamiliar with Japan LPs, you might wonder why we have so many Japanese records for sale and not, say, a comparable number of French or German records.

That’s a reasonable question, so we will explain why, as a collector, you may find it worth your while to add some Japanese records to your collection.

There was a time when the phrase, “made in Japan” was synonymous with poor quality, and most Japanese products were scorned as being cheap or poorly made.

Shortly after World War II, Japan’s manufacturing industry was trying to recover quickly from the war and to do so, they became primarily concerned with making inexpensive, low-quality merchandise that they could produce quickly.

That changed by the early 1960s, when the country began to try to change their image, much as South Korea and China have been doing in the past two decades. By the mid-1960s, Japan was known for producing high-quality cameras and stereo equipment, among other things.

With the increase in quality of stereo equipment, Japanese records also improved in quality, with record companies using better materials for their covers and high-quality, dead-quiet virgin vinyl for the records themselves.

By the early 1980s, Japanese records were being exported all over the world to be sold to quality-conscious audiophiles, who liked the high-quality covers and the quiet playing surfaces.

This was a time when American record companies were often making records from noisy, recycled vinyl, and using stampers until they wore out, which resulted in a poor sounding domestic product.  Many sound-conscious buyers began buying Japanese records instead.

Read on to see why so many record collectors are interested in buying Japanese records.

You can browse our selection of Japanese records here.

Why Collectors Seek Out Japanese Records 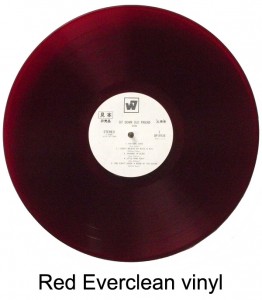 Besides good sound, a quiet playing surface, and quality cover printing, Japanese records also offered some other things of interest to the collector.

There are several things that make Japanese records appealing to both record collectors and audiophiles:

Toshiba, one of the primary record manufacturing companies in Japan, pressed many of their records on red, “Everclean” vinyl from 1958 through 1974.

The Everclean vinyl was designed to be less prone to collecting static electricity and dust than the more common black vinyl.

This “Everclean” formula was proprietary to Toshiba, so only the record labels that contracted with Toshiba to manufacture their records issued albums on red vinyl.

While not intended to be collectors’ items at the time of manufacture, these red vinyl pressings are more sought out by collectors today than their black vinyl counterparts, as colored vinyl records are far less common than black vinyl ones, and collectors like the unusual.

The labels that issued albums on red vinyl included Odeon, Liberty, Capitol, Stateside, Warner Brothers (through 1970), and World Pacific, which meant that collectors might find albums by such artists as the Beatles, Pink Floyd, Creedence Clearwater Revival, Quicksilver Messenger Service, the Grateful Dead, Frank Sinatra, and Julie London, among others, pressed on red vinyl. 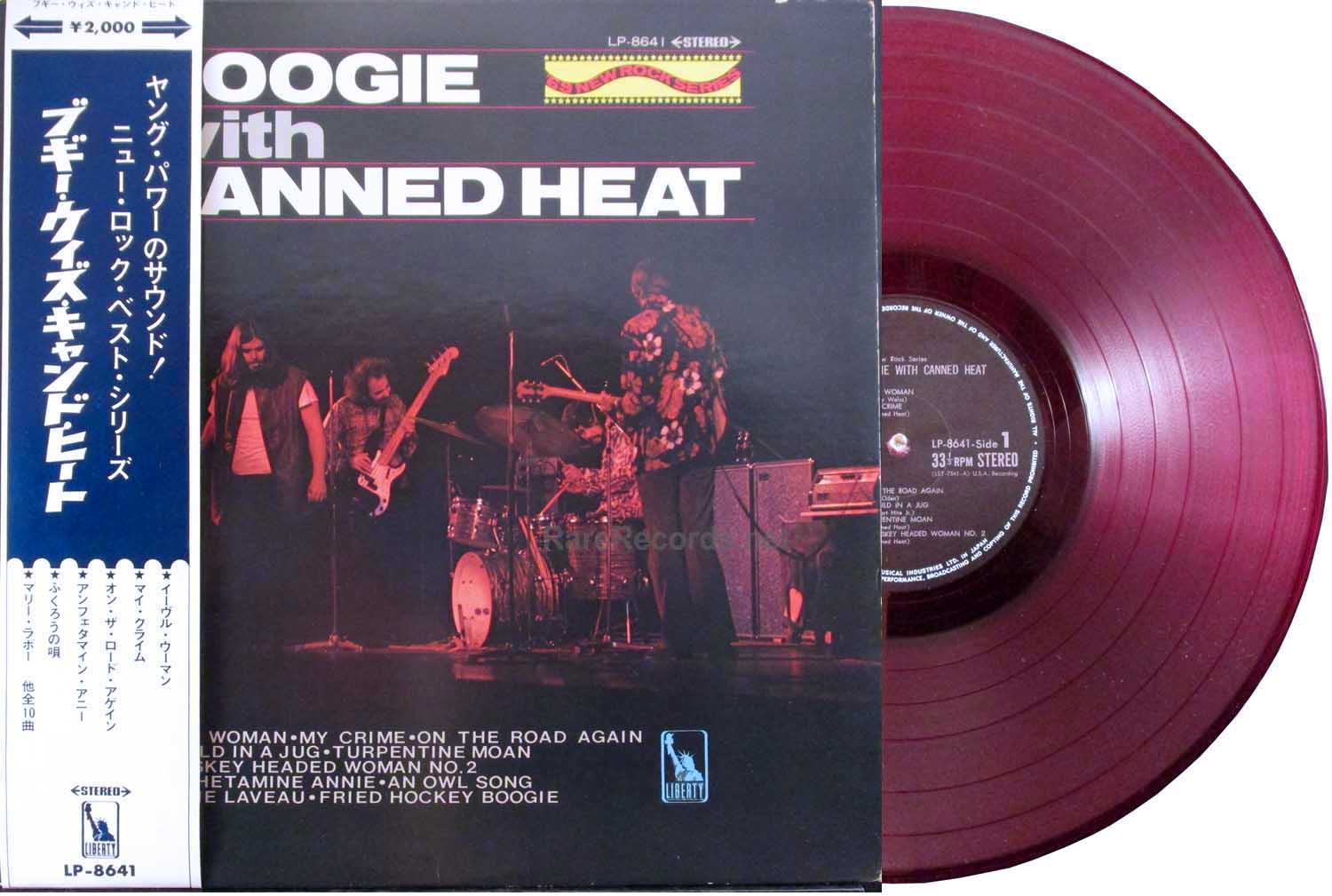 The decision regarding which Japanese records would be pressed on red vinyl was seemingly random; there was no way of knowing if a particular title by a given artist would come out on black vinyl, red vinyl, or both.

In a few cases, such as with Ummagumma by Pink Floyd, and Empty Sky by Elton John, the red vinyl was limited only to promotional copies, and all copies sold in record stores were black vinyl.   In the case of Live Album by Grand Funk Railroad, not only were the red vinyl pressings limited to promotional copies, but only one record of the two record set was pressed on red vinyl!

Different covers. Often, particularly in the 1960s, Japanese records were released with different covers than their U.S. counterparts. This was often a temporary measure, and these alternate covers rarely stayed in print for long.

One example would the the 1969 release of Smash Hits, by the Jimi Hendrix Experience. The original Japanese pressing featured a colorful photo of the entire band, taken through a fish eye lens.

Other Japanese LPs that had covers that were significantly different covers from their UK or U.S. counterparts were:

Relative rarity. Most Japanese records contain music by Japanese artists that are sung in Japanese; English-language albums have been, especially in the 1960s, a relatively small part of the overall industry.

As a result, most Japanese records of English-language music were pressed in small runs; sometimes as small as a few hundred copies. Rather than keeping titles in print, the records would be repressed if demand warranted it.

Depending on sales, reissues might come a few months later, or several years later.

Often, these repressings would have a different cover, catalog number, and obi from the earlier issue.  It isn’t unusual to find that some popular Japanese records have been released at least a half a dozen times, with each pressing being different in some way from all of the ones that preceded it.

Good sound quality. There are many factors that determine how a record will sound, including the quality of the master tapes used, how the record was mastered, and what kind of vinyl was used to press the records. Japanese records are often revered for their high quality sound.

American record companies that pressed records in the millions in the 1970s and early 1980s often used inexpensive or recycled vinyl to press their records, resulting in poor sound or excessive surface noise.

They would also press a high number of records from a single stamper, with each record pressed sounding worse than the one made just before it.

Most Japanese records were pressed using high quality “virgin” vinyl that was manufactured exclusively for pressing records. These records are often extraordinarily quiet and have little or no surface noise, allowing the listener a better listening experience.

In addition, English-language music titles were usually pressed in fairly small quantities in Japan, meaning all of the discs were likely pressed while the stampers were still fairly new.

For many years, Mobile Fidelity Sound Labs, an American company known for their high-quality audiophile pressings, contracted the pressing of their records to JVC in Japan, as JVC had invented an exceptionally durable and quiet vinyl compound known as “Super Vinyl” that was unavailable anywhere else.

The obi. While most Japanese records feature local music, a lot of music fans there like foreign music, as well. The language barrier in Japan presented a problem – should foreign album covers be changed for Japanese records,with artist names, album titles and song titles printed in Japanese?

The solution was the obi, which means “belt” or “sash”. The obi is a strip of paper, usually about two inches wide, that wraps vertically around the album cover, containing information about the artist and album in Japanese.

As these strips of paper were fragile and easily torn, they are often missing when older albums are found today, especially since consumers in the 1950s and 1960s attached little significance to them and often threw then away shortly after purchase.

Finding Japanese records made prior to 1970 that still have the obi intact can be quite difficult, and for some albums, nearly impossible. The inclusion of the obi can dramatically affect the price of some Japanese records, sometimes increasing the price by a factor of ten or more.

While usually found in a wraparound strip, there are other versions of the obi that have occasionally been used. In 1963, a short-lived hankake obi, or “half obi” was used. These were small strips of paper that simply folded over the top of the cover. These were problematic for retailers, as they tended to easily fall off of the record.

In the late 1960s and early 1970s, a few record companies, most notably RCA and CBS, used a larger, foldover obi that ran across the top of the cover. These are generally known as a “cap” obi, and are often missing, as the only thing that held them to the cover was the album’s original shrink wrap.

Some labels used a sticker instead of an obi in the 1970s and 1980s. These stickers were attached to the shrinkwrap itself and are often missing when these albums turn up for sale today.

Some collectors revere Japanese records for their high manufacturing quality and sound, and couldn’t care less about whether the obi is present or not.

Other collectors attach a great deal of significance to the obi, regarding it as an essential part of the album.

That’s a matter of personal preference, though a copy of an album with an obi will always command a higher price than a copy of the same album without one.

You can browse our selection of Japanese records here.