Offered for sale is an original Japanese pressing of Music From the Elder by Kiss, including the full cover sheet that was used instead of a traditional obi.

About this copy: This copy of Music from the Elder is an original 1981 pressing on the Casablanca label.

The lyric insert is VG+, with slight fading.

The sticker and generic “Casablanca Fair” insert are missing.

Background: Released in 1981, Music From the Elder was the ninth studio album by Kiss.

The album was not well received by the public and peaked at #75 on the U.S. album charts, largely because the band had changed their sound from hard rock to a more progressive sound.  The album was soon deleted.

Allmusic.com gave Music From the Elder a 2 star review:

By the end of 1980, Kiss knew that their next album had to be a strong one, a glorious return to hard rock à la their classic Destroyer. New drummer Eric Carr had refueled the band’s desire to rock, and the quartet began working on a straight-ahead rock album in early 1981. …Simmons and Stanley had high hopes for Music from “The Elder” (such as a movie, an elaborate tour, a follow-up record, etc.), but it completely bombed upon release. The reason? The music is totally uncharacteristic of Kiss — it resembles heavy prog rock for the most part. 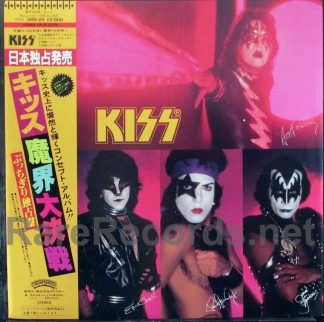 You're viewing: Kiss – Music from the Elder Japan LP with cover sheet obi $99.00
Add to cart