One often sees the term, white label promo in reference to certain types of records, but what does that mean? In short, it refers to a special pressing of a record that was manufactured specifically for radio station or other promotional (non-retail) use. 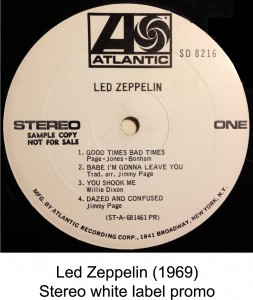 Early in the days of radio, disk jockeys would play whatever they felt like playing, without any input from the record companies. The relationship between radio and the music industry was a tense one, as record company executives felt that consumers would be reluctant to buy records they could hear on the radio for free.

By the 1950s, a few record companies changed their way of thinking, and decided that they might be able to have some degree of control over the songs played on the radio if they gave records to the radio stations free of charge.

They also realized that consumers would not buy records with which they were completely unfamiliar, and that hearing them played on the radio provided that familiarity which might encourage them to buy the record at a record store.

Rather than leave the choice of music played on the radio to random choices made by station personnel, the record companies began sending records to radio stations to encourage them to play them. This, in turn, could bring them to the attention of the public, who, in turn, would buy them in the stores.

Not wanting to confuse the free records provided to radio stations with the copies they were pressing for commercial sale, the record companies would usually mark the covers and the labels of these free records in some way so that it was obvious that these records were not to be sold, but were for radio and/or promotion use only.

This made it easier for record company accountants to keep track of which records were being sold for profit and which ones needed to be treated by the company as an advertising expense.

Record companies devised a number of methods to distinguish commercial, or “stock” copies of records from those intended for promotional use.

In some cases, promotional copies of records were simply stock copies that had the words “Demonstration – Not for Sale” applied to the cover or label using a rubber stamp. In some cases, a sticker with similar wording was affixed to a stock album cover, indicating that the record was intended for promotional use, while the label might have been identical to that of a stock copy.

Later, many record companies simply added wording such as, “promotional copy – not for sale” to their regular label artwork.

In the 1960s and 1970s, Capitol Records eschewed the white label promo altogether and used stock copies of their albums with the word “Free” or the word “Promo” punched through the album cover. Sometimes, they simply used a stock cover with a large hole punched in a corner, rather than press a special white label promo version of the album.

You can browse our white label promo and other promotional records here.

What’s so Special About a White Label Promo?

There are a few things that make white label promo records something of interest to collectors. First of all, they are, by definition, different from stock, or commercially released, pressings in that they have a completely different label.

Since collectors like things that are different, that alone makes them something to add to their collection. 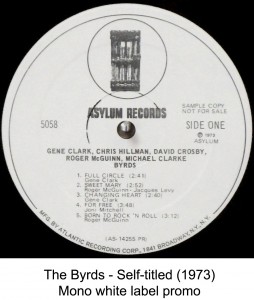 Second, the white label promo pressings are usually pressed before the commercial copies, in order to get them to the radio stations prior to the commercial release date. That means that the white label promo pressings are among the first records pressed from the stampers for a particular release, which generally means they may sound better than their stock counterparts.

Stampers wear out over time due to friction, and the last record pressed from a particular stamper generally will not sound as good as the first one pressed.

White label promo copies are desirable to collectors and audiophiles simply because they often sound better.

This continued into the early 1970s, but by then, most music stations had moved to the FM band. Because of this, these white label promo mono pressings were often pressed in minuscule numbers compared to the stereo versions.

These mono white label promo records, by definition, sounded dramatically different from the stock pressings, which were stereo only. Promo-only mono issues of some albums, such as those by Led Zeppelin, the Allman Brothers Band, or King Crimson, have been known to sell for thousands of dollars at auction.

Sometimes, a white label promo copy of a particular album can be different in other ways from stock copies. The 1967 LP by the Who, The Who Sell Out, consisted of songs with fake commercials in between them.

This was likely intended to make it easier for disk jockeys to play the songs themselves, rather than the commercials. The version of the album with all of the commercials on one side is quite rare.

In general, a white label promo pressing of any given record will sell, at a minimum, for 50% more than a standard stock pressing. This can increase dramatically for white label promo copies that are different in some way – different song listings, different running order, or a different mix. 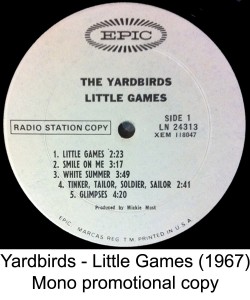 One of the problems with collecting white label promo copies of records is finding copies that are in acceptable condition. Many of these records were played on the radio, often by disk jockeys who didn’t pay much attention to taking care of the records.

Many white label promo records by rock bands of the 1960s, such as Cream, the Yardbirds, or the Who, are typically found in terrible condition today. Finding a pristine copy of one of these rare promotional records can be quite difficult, but also quite rewarding once you finally add one to your collection.

You can browse our white label promo and other promotional records here.