A 1981 Japanese pressing of King of the Delta Blues Singers by Robert Johnson, including the original “cap” obi.

Offered for sale is a Japanese pressing of King of the Delta Blues Singers by legendary bluesman Robert Johnson, including the original “cap” obi.

About this copy: This copy of King of the Delta Blues Singers is a 1981 Japanese pressing of an album that was originally released in 1961.

The cover is M- and retains the original shrink wrap.  The “cap” obi is M-.

A nice copy of a blues milestone.

Background: Released in 1961, King of the Delta Blues Singers was the record that introduced the world to now-legendary bluesman Robert Johnson.

Johnson died at 27, having released a handful of records in his brief recording career that all sold rather poorly.  They had long been valued by blues collectors, and in 1961, Columbia Records producer John Hammond collected sixteen songs from rare 78 RPM records and compiled them into this album.

The album has inspired countless musicians since, and may be the most influential blues album of all time.

Reading about the power inherent in Robert Johnson’s music is one thing, but actually experiencing it is another matter entirely. … If there is such a thing as a greatest-hits package available on Johnson, this landmark album, which jump-started the whole ’60s blues revival, would certainly be the one. The majority of Johnson’s best-known tunes, the ones that made the legend, are all aboard: “Crossroads,” “Walkin’ Blues,” “Me & the Devil Blues,” “Come On In My Kitchen,” and the apocalyptic visions contained in “Hellhound On My Trail” are the blues at its finest, the lyrics sheer poetry. …If you are starting your blues collection from the ground up, be sure to make this your very first purchase. 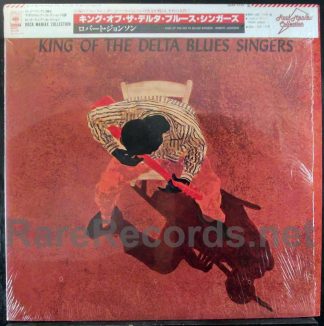