Offered for sale is a still sealed limited edition blue vinyl pressing of Stone Blue by Foghat, issued in Canada in 1978.

About this copy: This copy of Stone Blue is a blue vinyl Canadian issue on the Bearsville label.

While the album is still sealed, there are minor breaks in the wrap at all four corners and a tear in the wrap along the mouth.  We’ve secured this with tape to prevent further splitting in the shrink wrap.

The cover is VG+ with a hype sticker that says “Blue Vinyl Vinyl Bleu.” There is minor wear at the top left edge and at the corners.

A nice copy of a fairly scarce Foghat LP and one that rarely turns up sealed.

Background: Released in 1978, Stone Blue was the eighth album by Foghat.

The album reached #25 on the U.S. album charts and was certified Gold by the RIAA, their last album to earn gold status.

After racking up huge sales with Live, Foghat found themselves forced to choose between staying a hard rock cult group or trying to expand their success and become a full-on commercial phenomenon. They decided to experiment with adding a commercial edge to their sound and hired producing wiz Eddie Kramer (knob-twiddler for Jimi Hendrix and Kiss) to help them find the right balance between guitar power and studio gloss…. In the end, it offers enough solid tracks to please the hardcore Foghat fan but casual listeners would better off checking out Fool for the City or Live for a better, more consistent idea of the group’s strengths. 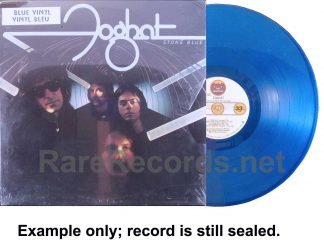