View cart “Mamas and the Papas – If You Can Believe Japan red vinyl LP with obi” has been added to your cart.

A rare red vinyl Japanese pressing of If You Can Believe Your Eyes and Ears by the Mamas and the Papas, complete with obi.

Offered for sale is a rare red vinyl Japanese pressing of If You Can Believe Your Eyes and Ears by The Mamas and the Papas, complete with original obi.

About this copy:  This copy of If You Can Believe Your Eyes and Ears is a 1971 Japanese reissue, pressed on red vinyl and including the original lyric insert and obi.  This copy has the “black border” cover.

The cover is VG+, with slight wear on the edges and corners.  The obi is M- and the “hojyuhyo”, or reorder tag, is still attached.

The red vinyl disc is VG+, with a few light marks and a few spindle marks on the label.  While not mint, it’s a very clean copy that clearly has not had a lot of play.

A beautiful and very rare copy of a terrific album and only the second complete copy we’ve ever seen.

Background:  If You Can Believe Your Eyes and Ears was the debut album by the Mamas and the Papas, and it turned them into superstars overnight.  Containing the hits “Monday, Monday,” “California Dreamin’,” and “I Call Your Name,” the album reached #1 on the Billboard charts.

Allmusic.com gave If You Can Believe Your Eyes and Ears a 4 1/2 star review:

In the spring of 1966, If You Can Believe Your Eyes and Ears represented a genuinely new sound, as fresh to listeners as the songs on Meet the Beatles had seemed two years earlier. Released just as “California Dreaming” was ascending the charts by leaps and bounds, it was the product of months of rehearsal in the Virgin Islands and John Phillips’ discovery of what one could do to build a polished recorded sound in the studio — it embraced folk-rock, pop/rock, pop, and soul, and also reflected the kind of care that acts like the Beatles were putting into their records at the time. “Monday, Monday” and “California Dreamin'” are familiar enough to anyone who’s ever listened to the radio, and “Go Where You Wanna Go” isn’t far behind, in this version or the very similar rendition by the Fifth Dimension. But the rest is mighty compelling even to casual listeners, including the ethereal “Got a Feelin’,” the rocking “Straight Shooter” and “Somebody Groovy,” the jaunty, torch song-style version of “I Call Your Name,” and the prettiest versions of “Do You Wanna Dance” and “Spanish Harlem” that anyone ever recorded.

The album is also interesting in that there were at least five different covers used for the album in various countries, often with variations intended to disguise the fact that the cover photo was shot in a bathroom.  The most obscure cover was one with a heavily cropped photo with large black border that hides everything except the members of the group.

In Japan, the album was originally released in 1966 or 1967 on the RCA Victor label on black vinyl only with a cover that showed the full bathroom, but with a banner covering the toilet.  When the group reunited in 1971 to release the People Like Us album, all of their earlier titles were reissued in Japan on the Stateside label, and some of those records were pressed on red “Everclean’ vinyl.

As the albums sold best when they were first released, the reissues are quite scarce.  Those reissues included If You Can Believe Your Eyes and Ears, which was reissued with the heavily cropped photo with the black border. 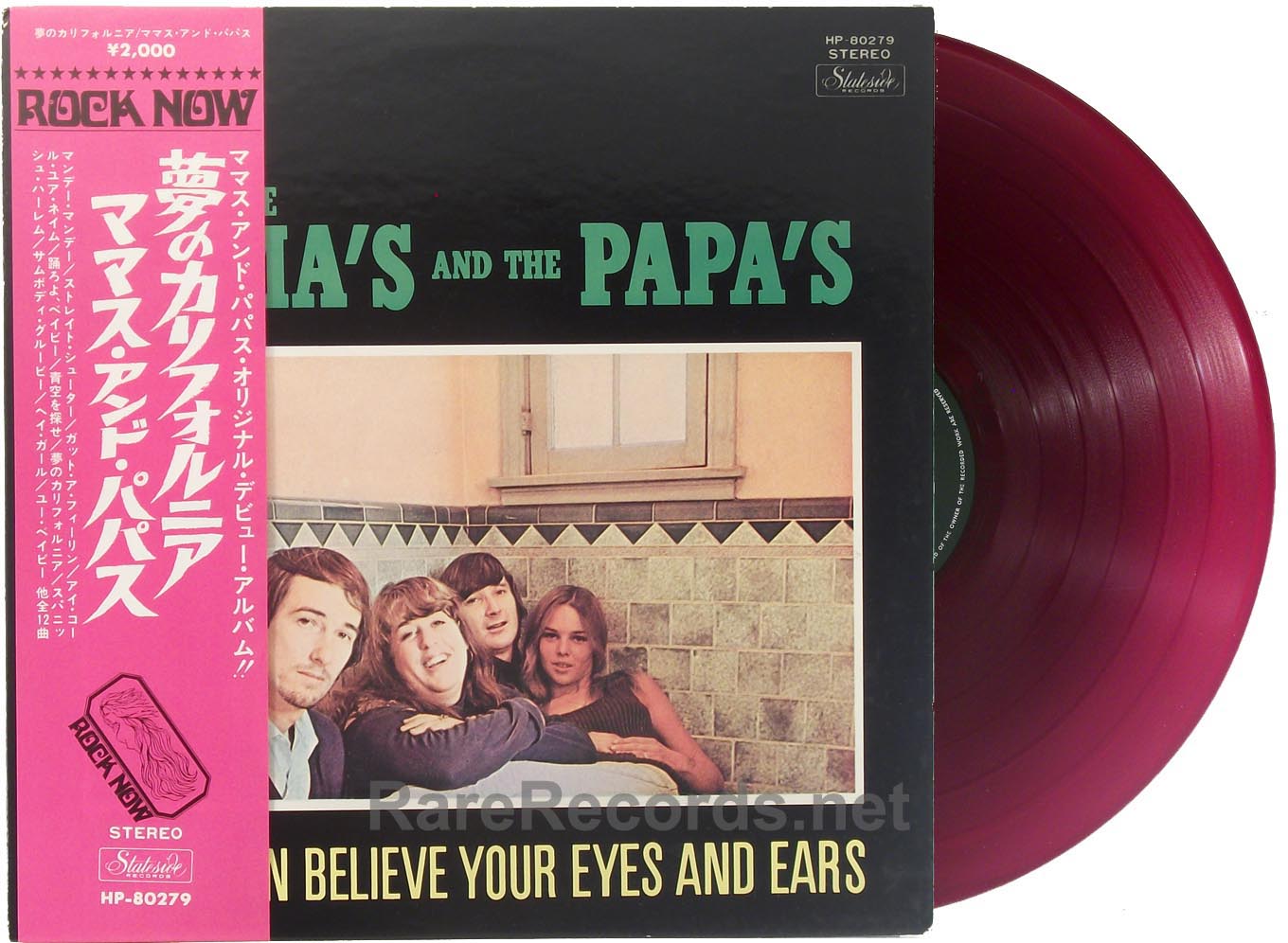 You're viewing: Mamas and the Papas – If You Can Believe Japan red vinyl LP with obi $195.00
Add to cart