Offered for sale is what is believed to be a complete set of Voices of Vista radio shows that included material by Lesley Gore – 7 albums in all.

The Voices of Vista series was issued without covers; each of the albums listed below comes in a plain white cover.   The LPs and artists featured in this set are:

A nice copy of a hard to find set.

Background: VISTA, or Volunteers in Service to America, was an anti-poverty program created in 1965 by President Lydon Johnson.  In order to promote this government program, a radio series called Voices of Vista was created.

Most of the shows in the series featured anywhere from two to six artists, and radio programmers were expected to play individual portions of the album on a schedule that suited them and their programming, rather than playing the LP in its entirety.

In fact, you couldn’t play the album in its entirety, as each track had a “locked groove” that prevented the next track from playing automatically.  You had to move the tonearm to play the next track.

There are likely several hundred different discs in the entire Voices of Vista series; as far as we know, there are only seven that include Lesley Gore.  Each of the shows listed below has a segment featuring Lesley introducing the segment and saying goodby at the end, along with a track in the middle and a short interview with host Herb Oscar Anderson and a VISTA volunteer. 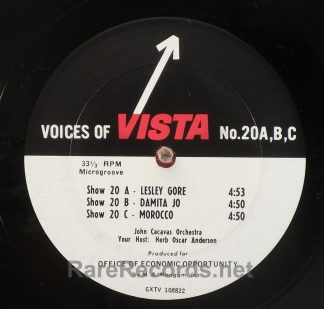