An original mono copy of In Concert by Joan Baez, released in 1962.

Offered for sale is an original mono pressing of the 1962 album, In Concert by Joan Baez.

About this copy: This copy of In Concert is an original 1962 mono pressing with the album’s original title.

The cover is VG+, with some slight ring wear and wear at the edges and corners.

The record is M- and appears to have had little, if any play.  There are a couple of very faint scuffs from the paper inner sleeve.

A nice copy of a terrific recording.

Background:  In Concert, released in 1962, was the third album by Joan Baez.  It was quite successful, reaching #10 on the U.S. album charts and was certified gold.

The album is noteworthy for containing the song, “Babe, I’m Going to Leave You,” which was later made famous by Led Zeppelin.

Originally released in 1962, In Concert, Pt. 1 captures the undisputed queen of folk music at the onset of her fabled career….Though Baez was reportedly suffering from stage fright at the time of these recordings, which were cobbled from the fall of 1961 to the spring of 1962, her delivery is crystal clear and confident. … Baez’s performances still retain freshness and vitality after four decades.

You can listen to “Babe, I’m Going to Leave You” here: 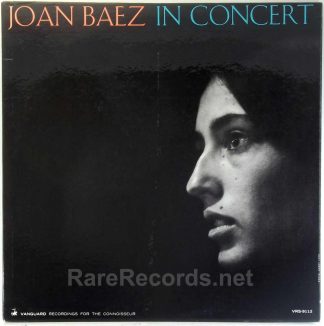