View cart “Bob Dylan – The Times They Are A-Changin’ sealed Mobile Fidelity LP” has been added to your cart.

A Japanese pressing of No Pussyfooting by Robert Fripp and Brian Eno, including the original obi.

Offered for sale is a Japanese copy of No Pussyfooting by Fripp & Eno, including the original obi.

About this copy: This copy of No Pussyfooting is an original 1979 Japanese pressing on the Polydor label.  While the album was first released in 1973, it wasn’t issued in Japan until six years later.

The disc is M-, with a single spindle mark on each label.  Beautiful disc!

A nice copy of a scarce Fripp/Eno/Roxy Music/King Crimson LP.

The album didn’t chart anywhere, but was highly influential in the ambient/electronic niche.

At the same time Brian Eno was working on Here Come the Warm Jets, he was flexing his experimental muscle with this album of tape delay manipulation recorded with Robert Fripp. In a system later to be dubbed Frippertronics, Eno and Fripp set up two reel-to-reel tape decks that would allow audio elements to be added to a continuing tape loop, building up a dense layer of sound that slowly decayed as it turned around and around the deck’s playback head. Fripp later soloed on top of this. …Eno and Fripp later refined the system on Evening Star and Eno’s solo album Discreet Music. Fripp would take the system and base whole albums and live appearances around it (particularly Let the Power Fall). But it was here on (No Pussyfooting) where it all started. 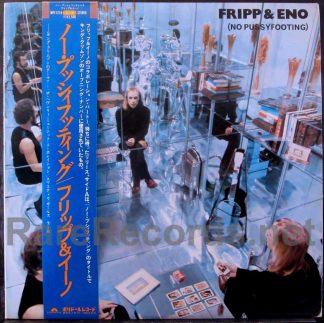