An original Japanese pressing of True Blue by Madonna, including the original obi.

Offered for sale is an original Japanese pressing of True Blue by Madonna, including the original obi.

About this copy: This copy of True Blue is an original 1986 Japanese pressing on the Sire label.

The cover is M-, with two tiny corner dents.  The obi is M-.

The insert is VG++, with no wear or tears, but a bit of foxing.

Background: Released in July, 1986, True Blue was the third album by Madonna.

The album reached #1 in the U.S., UK, Germany, France, Italy, Spain, Switzerland, and Australia, and has sold more than twenty-five million copies, making it one of the best selling albums of all time.

True Blue is the album where Madonna truly became Madonna the Superstar — the endlessly ambitious, fearlessly provocative entertainer who knew how to outrage, spark debates, get good reviews — and make good music while she’s at it. To complain that True Blue is calculated is to not get Madonna — that’s a large part of what she does, and she is exceptional at it, but she also makes fine music. What’s brilliant about True Blue is that she does both here, using the music to hook in critics just as she’s baiting a mass audience with such masterstrokes as “Papa Don’t Preach,” where she defiantly states she’s keeping her baby. …Certainly, there’s some calculation behind the entire thing, but what matters is the end result, one of the great dance-pop albums, a record that demonstrates Madonna’s true skills as a songwriter, record-maker, provocateur, and entertainer through its wide reach, accomplishment, and sheer sense of fun. 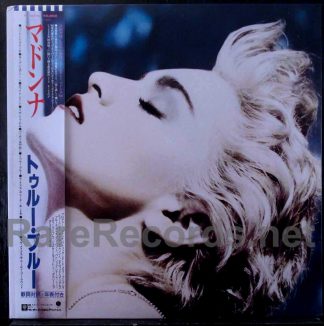