An original U.S. mono pressing of the 1966 LP Psychotic Reaction by the Count Five.

Offered for sale is an original U.S. mono pressing of Psychotic Reaction by the Count Five.

About this copy: This copy of Psychotic Reaction is an original 1966 mono pressing on the original Double Shot label.

The cover is VG, with some ring wear at the bottom of the front cover and wear at the edges and corners.

A beautiful copy of a record that’s quite hard to find in mono.

Background:  Psychotic Reaction was the only LP from San Jose-based Count Five, a band that consisted largely of members who were still in their teens when the album was recorded.

The title cut was released as a single and reached #5 on the Billboard charts.  The album, with poor distribution from the small Double Shot label, peaked at #122 on the album charts.

While the album was released in both stereo and mono, the stereo pressings were electronically rechanneled, or “fake,” stereo, making the mono pressings more desirable.

Subsequent singles from the band gained little notice and they moved on to other things. 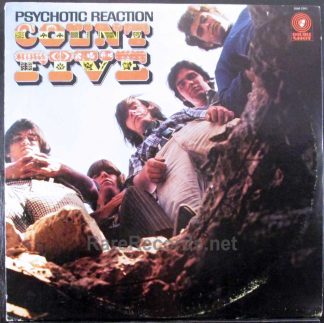