Them – Them Again Japan white label promo LP with obi

A 1978 Japanese white label promotional pressing of Them Again by Them, complete with original obi.

Offered for sale is a rare Japanese white label promotional copy of Them Again, by Them, featuring Van Morrison.

About this copy: This copy of Them Again is a white label promo copy of the 1978 issue of an album that was originally released in 1966, complete with original obi and lyric insert.

Cover, obi, and disc are M-.  The disc looks unplayed.

A beautiful copy of a hard to find Van Morrision item.

Background: Them Again, released in 1966, was the second album by Them and the final album by the band to include Van Morrison.

The group’s second and, for all intents and purposes, last full album was recorded while Them was in a state of imminent collapse. To this day, nobody knows who played on the album, other than Van Morrison and bassist Alan Henderson, though it is probable that Jimmy Page was seldom very far away when Them was recording… but the main thrust is soul, which Morrison oozes everywhere — while there’s some filler, his is a voice that could easily have knocked Mick Jagger or Eric Burdon off their respective perches. 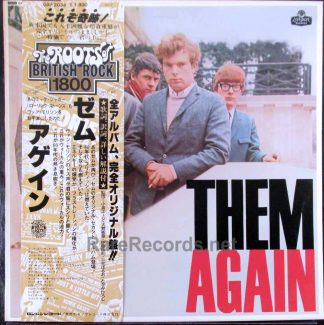 You're viewing: Them – Them Again Japan white label promo LP with obi $79.20
Add to cart