An original 1967 Japanese white label promotional copy of the Bee Gees First by the Bee Gees, with a unique Japan-only cover and original obi.

Offered for sale is an ultra-rare original 1967 Japanese white label promotional pressing of The Bee Gees First by the Bee Gees, featuring a unique cover that was only used in Japan as well as the original obi and lyric insert.

About this copy: This copy of The Bee Gees First is an exceptionally nice original Japanese stereo promotional pressing with the nearly-always-missing original obi.

This is the 1967 true first pressing with the SLPM-1379 catalog number.

The cover is VG++, with a few wrinkles in the thin, laminated cover.  The original lyric insert is included.  It’s M-, with no holes, writing, or tears, but it does have a bit of foxing.

The rare obi is complete with only a very small (1/8″ or so) tear near the top.  The obi has a few minor wrinkles and a bit of foxing.

The white label promo disc is M- and aside from a spindle mark or two on the labels, appears to be virtually unplayed.

A gorgeous copy of an album that’s rarely found either complete or in this condition and one of the world’s rarest Bee Gees records.

Background: The Bee Gees First, released in 1967, was actually the group’s third album, but it was the first one to have a worldwide release.

The U.S. and UK pressings had a fairly psychedelic cover and the same art was used in both countries. (see photo for example of the U.S./UK cover)

The original Japanese release used an even more psychedelic cover, but only for the first pressings.  Later reissues used the U.S./UK cover.

The track listing was the same in all three countries, though the U.S. issue reversed the first tracks on the two sides.

The debut international long-player by the Bee Gees may shock anyone who only remembers them for their mid- to late-’70s disco mega-hits, or their quirky early-’70s romantic balladry. Up until 1966, they’d shown a penchant for melodic songs and rich, high harmonies, in the process becoming Australia’s answer to the Everly Brothers. When the Bee Gees arrived in London late in 1966, however, they proved quick studies in absorbing and assimilating the progressive pop and rock sounds around them. In one fell swoop, they became competitors with the likes of veteran rock bands such as the Hollies and the Tremeloes, and this long-player, Bee Gees’ 1st, is more of a rock album than the group usually got credit for generating. Parts of it do sound very much like the Beatles circa Revolver, but there was far more to their sound than that.

You can listen to “Holiday” here: 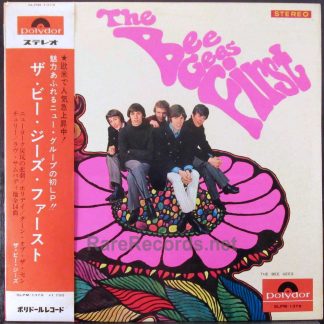