A sealed stereo pressing of the 1967 LP Just for You by Neil Diamond.

Offered for sale is a still sealed stereo copy of the 1967 LP Just for You by Neil Diamond.

About this copy: This copy of Just for You is as nice a copy as you’d ever hope to find.  It’s a sealed original 1967 stereo pressing and the record is presumably new and unplayed.

The shrink wrap is tight and fully intact except for a tiny (1/8″ or so) break at the lower left corner.  There are a couple of very small corner dents.

There are no rips or tears in the wrap, and surprisingly, no punch holes, saw marks, cut corners or any other cutout marks.

A beautiful copy of a terrific album and the only sealed copy we’ve ever seen.

Background: Just for You, released in August, 1967, was Neil Diamond’s second album and his final studio album for Bang Records.

While the album only reached #80 on the U.S. album charts, every single song on the LP was released as either an A or B side of a single, making the songs on this album some of Diamond’s best-known songs.

Allmusic.com gave Just for You a 3 1/2 star review:

Neil Diamond was on the cusp of discovering a new genre with his second album, which perfectly straddled early- and mid-’60s Brill Building teen pop and the as-yet-unidentified (and unnamed) singer/songwriter genre. The production is as smooth and crisp (and solidly commercial) as anything ever to come from the renowned hit factory at 49th and Broadway by way of the Monkees, Little Eva, the Raindrops, et al. But unlike his debut LP, this time out every song (including two carried over from his debut) is a Diamond original, and his voice and delivery are a lot more sophisticated… 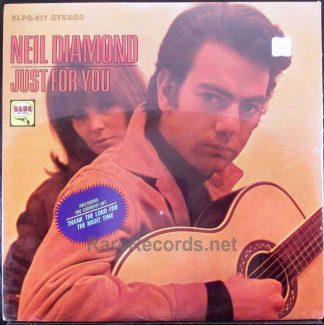