A limited edition orange vinyl pressing of the first album by the Rolling Stones, including the original obi.

Offered for sale is a limited edition orange vinyl Japanese pressing of the first album by the Rolling Stones, England’s Newest Hitmakers, including the original obi.

This LP features the U.S. version of the album.

About this copy: This copy of England’s Newest Hitmakers is a 1981 Japanese pressing of an album that was originally released in 1964.

The cover is M-, with trace corner wear.  The insert is M-, as is the included postcard.

The obi is in good condition, as the top one inch is missing.  We’ve repaired it to hold it in place.

The orange vinyl disc is M- and looks unplayed.  There’s a bit of foxing on the labels.

The album reached #1 in the UK and #11 in the U.S., and is, to date, the only studio album by the Rolling Stones not to make the Top 10 in the United States.

The British version of the Stones’ first album has a nearly identical cover to its American equivalent, issued six weeks later, but a slightly different song lineup. Among these 12 songs, absent is “Not Fade Away,” which was a hit single in England (where singles and LPs were usually kept separate), and in its place is the Stones’ cover of Bo Diddley’s “Mona (I Need You Baby)” (credited here as “I Need You Baby”), which had to wait until Rolling Stones Now!, a year later, for its U.S. release. 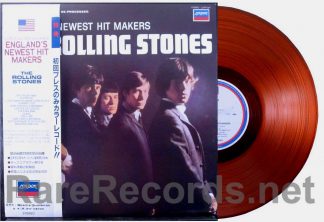