A red vinyl Japanese pressing of Something Cool by June Christy, including the original obi.

Offered for sale is a red vinyl mono Japanese pressing of Something Cool by June Christy, including insert and the original obi.

About this copy: This copy of Something Cool is a 1969 Japanese pressing of an album that was originally released (in this form) in 1955.

The cover, obi, and insert are all M-.  There are two hype stickers on the cover – one says “Capitol Jazz Must Item Series” and the other says “S.J. Seal of Approval.”  The “hojyuhyo,” or reorder tag, is still attached to the obi.

The red vinyl disc is M- with a single spindle mark on the side two label and no marks at all on the vinyl.  It looks like someone played side one once and put the album away forever.

A virtually perfect colored vinyl copy of a classic Jazz/pop LP and likely the nicest copy you’ll ever see.

Background: Something Cool was the first and best-known album by Jazz singer June Christy.  Originally released in 1954 in mono with seven songs, the album was expanded to eleven songs in 1955.

In 1960, all eleven songs were re-recorded in stereo, and for many years, the stereo re-recording was the only version of the album that was available anywhere.

June Christy’s Something Cool, originally released as a 10″ LP in 1954, single-handedly inaugurated the cool jazz vocal movement. Christy had been a star vocalist with the Stan Kenton Orchestra in the late ’40s, enjoying major hits with “Tampico” and “Shoo Fly Pie & Apple Pan Dowdy.” Soon after she left the band, she began working with key Kenton arranger Pete Rugolo and a slew of top West Coast studio musicians (including her husband, tenor saxophonist Bob Cooper) on her first solo album for Capitol Records. The result was Something Cool, which is both a winning showcase for Christy’s wistful style and a landmark of cool jazz modernism. 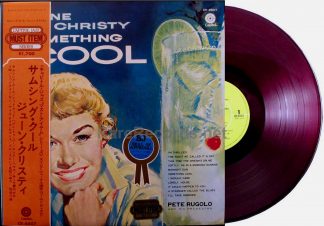