A limited edition colored vinyl pressing of the first album by the Pretty Things, issued in 2010 by Sundazed records.

Offered for sale is a still sealed, limited edition colored vinyl mono pressing of the first album by the Pretty Things, released in 2010 by Sundazed Records.

About this copy: This copy of Pretty Things is a limited edition colored vinyl pressing on the Sundazed label.

The album is still sealed and is presumed to be mint and unplayed. The shrinkwrap is tight with no tears or rips and has two stickers – a hype sticker for Sundazed vinyl and a sticker that reads “Sundazed Colored Vinyl.”

All copies of this LP are now out of print and we haven’t seen a colored vinyl copy of this for sale in years.

Background: Released in 1965, Pretty Things was the debut LP by the band of the same name.  The album reached #6 on the UK charts, but did not chart in the U.S.

The Pretty Things’ debut LP was a legendary exercise in anarchy — 30 minutes into the two days’ worth of sessions, their original producer, Jack Baverstock (the head of the label, no less), walked out, and was eventually replaced by a slightly more sympathetic personality in the hopes of salvaging something from the efforts of the band, who, whatever their shortcomings in decorum or sobriety, were on their third successive charting single. The resulting album, made under the coordination (if not control) of drummer-turned-producer Bobby Graham, made the early work of the Rolling Stones — rivals and one-time bandmates to the Pretty Things’ Dick Taylor — sound more like the work of the Beatles: very calculated, lightweight, and…genteel. .. Phil May reveals himself as a fairly powerful singer, though lacking some of the charisma that Mick Jagger projected, but the group’s own raw power made for quirky appeal all of its own that would carry them for many years beyond this roaring start. And in the meantime, records like this would point the way not only toward the work of such American garage band icons as the MC5, but blast a path through the wilderness that the likes of Billy Childish and his band the Milkshakes and their successors would traverse. 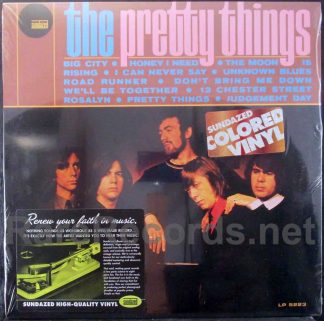