An original Japanese pressing of the 1971 LP Rainbow Bridge by Jimi Hendrix, including the original obi.

Offered for sale is an original Japanese pressing of Rainbow Bridge by Jimi Hendrix, including the original obi.

About this copy: This copy of Rainbow Bridge is a 1971 Japanese pressing on the Reprise label.

The cover is M- with trace corner wear.

The disc is M- and looks like it may have only been played once or twice.  Beautiful disc!

A gorgeous copy of a scarce Hendrix LP.

Despite the title, the album is not the soundtrack to the Rainbow Bridge film, though it does contain a mixture of live and then-unreleased studio material.

Back when Rainbow Bridge was originally released, it was actually among the best of the posthumous Hendrix releases. Billed as “the original motion picture soundtrack” (it wasn’t, really), it was a mix of excellent, finished studio tracks and a couple of live tracks. .. Highlights include overlooked gems like “Pali Gap” and Jimi’s rarely heard studio version of “The Star Spangled Banner,” which is made of multi-tracked guitars and basses. 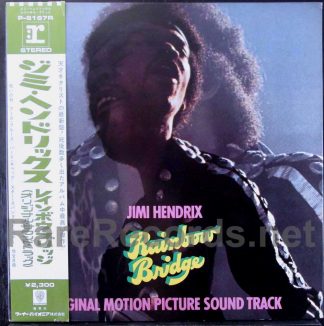