Offered for sale is a still sealed original pressing of Showtime by James Brown, released by Smash Records in 1964.

About this copy: This copy of Showtime is an original still sealed stereo pressing on the Smash label, released in 1964.  While the shrink wrap has been removed from the cover, the disc is still sealed in its original polyethylene sleeve and is presumably new and unplayed.  Stereo copies are much harder to find than their mono counterparts, as most copies sold when this album was new were in mono.

The cover is VG++, with a tiny bit of wear at the edges.  It’s hard to find any James Brown LPs from the 1960s in good condition, and it will be hard to find a nicer copy of Showtime than this one.

Background: James Brown was not only a good entertainer, but he was a smart businessman, too.  Due to a loophole in his contract with King Records, Brown found a way to record simultaneously for Smash Records, though his titles for Smash didn’t generate the hits that his King LPs did.

Showtime, released in 1964, presents itself as a live album, though the cover never claims that it’s a live album.  It’s not; it’s a “fake” live album consisting of new studio recordings with an overdubbed audience.

A transition album. James Brown’s contract with King Records had a few more legs, and the Godfather of Soul was handicapped in what he could wax for Smash Records, his new label. Hence, an album of remakes enhanced — or marred — by overdubbed applause. Some apparently don’t have a problem with overdubbed applause, judging from the lofty prices record collectors ask and get for a copy. Brown does his best retooling on Louis Jordan’s “Caledonia,” “Ain’t Nobody Here But Us Chickens,” and “Somebody Changed the Lock on My Door.” 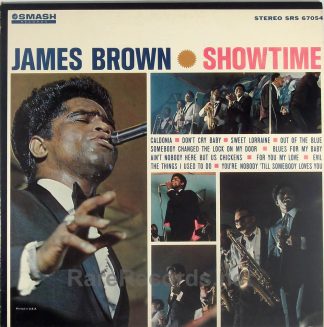