A Japanese pressing of Primitive Love by Miami Sound Machine, including the original obi.

Offered for sale is an original Japanese pressing of Primitive Love by Miami Sound Machine, including the original obi.

About this copy: This copy of Primitive Love is a 1985 Japanese pressing on the Epic label.

The disc is M- and looks like it may have been played once.

Background: Released in 1985, Primitive Love was the ninth album by Miami Sound Machine.

The album reached #21 on the U.S. album charts.

Few modern-day listeners realize it because so much of the group’s back catalog languished out of print seemingly forever, but it took Miami Sound Machine nearly ten albums to score a crossover hit. That crossover hit, “Conga,” was quite a song, of course, and it not only allowed Miami Sound Machine to “cross over,” but also rocketed them from regional to international recognition in one fell swoop as the song became a dancefloor phenomenon. (For instance, there allegedly was a news story at the time about how people in Miami were so enamored with the song that they formed a three-mile-long line dance in the city streets!) There’s more to Primitive Love than “Conga,” of course, but the song is so singular that it’s hard to discuss the album without going on and on about the song and its storied success. … Miami Sound Machine’s next album, Let It Loose, is almost a song-for-song rewrite of this one — and a better one, it should be noted. But Primitive Love certainly has its own charms, and while it may sound jarring to modern ears with its pervasive mid-’80s synth-drums, that’s part of its quirky charm. And if anything, there’s always “Conga,” which alone makes this album noteworthy. 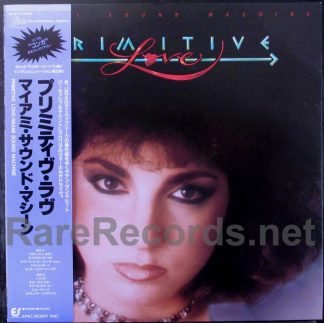