A rare red vinyl 1967 Japanese issue of A Hard Day’s Night by the Beatles, including the original obi.

Offered for sale is a rare complete 1967 red vinyl Japanese pressing of A Hard Day’s Night by the Beatles, including the original obi and a cover that was unique to the Japanese release.

This album contains the same track listing as the UK version of the album.

About this copy: This copy of A Hard Day’s Night is a 1967 Japanese pressing of an album that was originally issued in 1964, pressed on “Everclean” red vinyl.

Technically, this is the third pressing of the album, following the original 1964 issue with the hankake “half-obi” and the 1966 issue with the blue obi.

This copy is in astonishing condition and looks virtually new.

The cover is M-.  The obi is M- with a minor fold on the “hojyuhyo,” or reorder tag, which is still attached.

The insert is M- with no fading but a very minor fold in one corner.

The red vinyl disc is M- and looks unplayed.

A beautiful copy of a terrific LP and likely the nicest copy we’ll ever see.

Background: Originally released in 1964, A Hard Day’s Night was the third UK Beatles album and the soundtrack to their first film.

The original Japanese issue had a cover photo that was taken from the film that was unique to the Japanese release.

The album reached #1 on both the UK and U.S. charts.

Considering the quality of the original material on With the Beatles, it shouldn’t have been a surprise that Lennon & McCartney decided to devote their third album to all-original material. Nevertheless, that decision still impresses, not only because the album is so strong, but because it was written and recorded at a time when the Beatles were constantly touring, giving regular BBC concerts, appearing on television and releasing non-LP singles and EPs, as well as filming their first motion picture. In that context, the achievement of A Hard Day’s Night is all the more astounding. Not only was the record the de facto soundtrack for their movie, not only was it filled with nothing but Lennon-McCartney originals, but it found the Beatles truly coming into their own as a band by performing a uniformly excellent set of songs. …It’s the pinnacle of their early years. 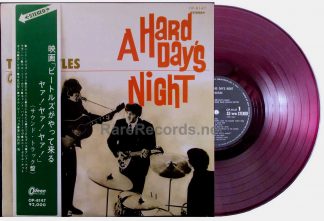