A Japanese white label promotional copy of the self-titled debut LP by Foghat, including the original obi.

Offered for sale is a Japanese white label promotional copy of Foghat, the self-titled debut LP by Foghat.

Despite Foghat’s later success, this LP was never reissued in Japan after the 1972 pressing.

About this copy: This copy of Foghat is an original 1972 Japanese white label promo pressing on the Warner Brothers label.

A gorgeous copy of a terrific LP.

Background: Released in 1972, Foghat was the debut LP by the band of the same name, formed by members of Savoy Brown and Black Cat Bones.

Foghat reached #127 on the U.S. album charts and was eventually certified gold by the RIAA, helped by airplay for the song “I Just Want to Make Love to You.”

Breaking away from Savoy Brown to form this band, the members of Foghat knew from the start what sort of record they wanted to make. With heavy emphasis on the hard boogie, Foghat got down to work with the help of Dave Edmunds and crafted a hard rock gem. Covering Chuck Berry’s “Maybellene,” they goosed the beat up until it was almost a precursor of the heavy metal yet to come. Interspersing covers with original material, they immediately found a place for themselves in the rock world. 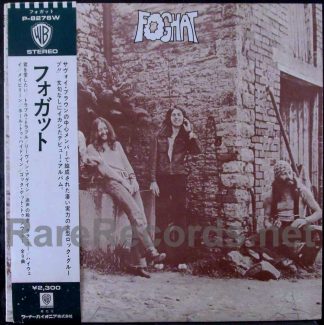