An original U.S. pressing of the 1969 LP Take Me to the Mountains by Shiva’s Headband.

Offered for sale is an original U.S. pressing of Take Me to the Mountains by Shiva’s Headband.

About this copy: This copy of Take Me to the Mountains is an original 1969 U.S. pressing on the green Capitol label.

The cover is VG, with general wear.

The disc is M-, with a few faint scuffs from being removed from the inner sleeve, but no marks on the vinyl or spindle marks on the label.

A nice copy of a scarce rock/country/psych LP.

Background: Shiva’s Headband holds the distinction of being the first band from Austin, Texas to release an album with national distribution.

Unfortunately, the album didn’t sell particularly well, and the band’s next effort, Coming to a Head, was privately pressed.

Allmusic.com gave Take Me to the Mountains a 4 star review:

The album is formidable, and its influence on the “galactic cowboy” genre was as great as, say, Love’s Forever Changes was to the West Coast rock scene. It laid the groundwork for psychedelic twang and brought the world’s attention to the creatively diverse (yet firmly rooted) music that was beginning to blossom back in those Texas heyday. Unlike their peers the 13th Floor Elevators, Shiva’s Headband never took off into the stratosphere completely, though. Their rock was honest country-rock all the way, but not to the point that it was ever just a pedestrian rehash. 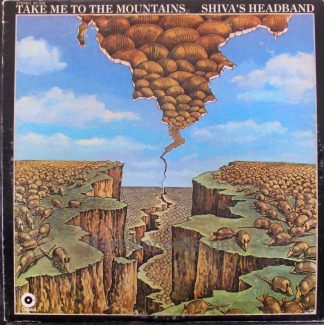