An original red vinyl Japanese pressing of Space by the Modern Jazz Quartet, including the original obi.

Offered for sale is a rare red vinyl Japanese pressing of Space by the Modern Jazz Quartet, including the original obi.

About this copy: This copy of Space is an original 1979 Japanese pressing on the Apple label, pressed on “Everclean” red vinyl.

The cover is VG++, with trace edge and corner wear.  The obi is M-; the “hojyuhyo,” or reorder tag, is still attached.

The insert is M-.  The original black inner sleeve is included and has no splits.

The disc is VG++ on side one, as there’s a small inaudible scratch through the first track, but no other marks on that side.  Side two is M- and looks unplayed.

Background: Released in 1969, Space was the second of two albums that the Modern Jazz Quartet recorded for the Beatles’ Apple label.

The band was a poor fit for the label, which likely had no idea how to promote them, and the album did not chart.

The Modern Jazz Quartet took a hiatus from Atlantic Records to record two LPs for The Beatles’ Apple label. Despite the switch, The MJQ’s music remained unchanged; it was too classic to alter. This out-of-print album has among its selections a pair of obscure John Lewis originals (“Visitor from Venus” and “Visitor from Mars”), vibraphonist Milt Jackson’s ballad feature on “Here’s That Rainy Day” and the lengthy “Adagio from Concierto De Aranjuez.” Overall this is an average but worthy outing from a group whose excellence could always be taken for granted. 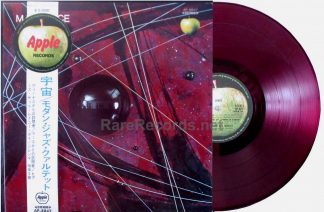