About this copy: This copy of Melissa Etheridge is an original 1988 Japanese pressing, complete with obi and insert.  This is a promotional copy with “sample” on both labels in Japanese and a promotional sticker on the back cover.

Cover, insert, obi, and disc are all M-.  The disc shows no signs of play.

A beautiful copy of a very rare Melissa Etheridge LP.

Background: This LP isn’t supposed to exist.  In 1989, we were buying records regularly from a Japanese wholesaler and we inquired as to whether Melissa Etheridge had been pressed on vinyl in Japan, as we liked this album a lot.

Our source said that someone at the record company told them the album had been issued in Japan only on compact disc and that there was no vinyl.

And then, fifteen years later, we found this copy.  We’ve since seen one other, and both were promotional copies.  We have no idea if any stock copies were pressed, but there likely are a few, as promo-only releases were usually issued without an obi.  Regardless, it’s a very rare LP, and it’s likely that only a few hundred copies were pressed.

It’s also the only Melissa Etheridge album to have been released on vinyl in Japan.

This was one of the most stunning debut albums of the 1980s. Given the domination of synthesizer pop on the radio, Melissa Etheridge was a breath of fresh air when she burst out of the gate with this roots rock album sung with a sensitive bravado often compared to Janis Joplin. … Etheridge’s true talent, however, is reconciling uncontrollable emotions such as jealousy with a strong and fiercely independent spirit (“Similar Features,” “Like the Way I Do”). Perhaps that’s why Etheridge became a role model for a generation of young women who found her to be an uncompromising artist unafraid to expose (and celebrate) her strengths and weaknesses. This is a fine introduction to Melissa Etheridge, and it is one of her most enjoyable albums. 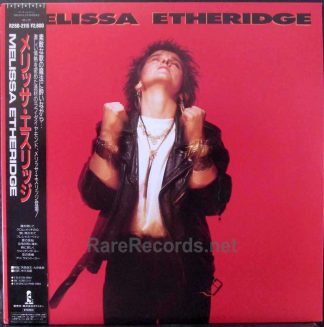