Offered for sale is a still sealed copy of the limited edition, direct-to-disk recording of Earl “Fatha” Hines Plays Hits He Missed by Earl Hines.

This title is one of several highly regarded direct-to-disk LPs released by the short-lived Miller & Kreisel label.

About this copy: This copy of Earl “Fatha” Hines Plays Hits He Missed is an original 1978 direct-to-disk pressing by M&K Realtime Recordings.

These LPs were U.S. issues, though the discs were pressed in Germany on high-quality Teldec vinyl.

The album is still sealed in the loose shrink wrap.  The wrap is fully intact except for a 4″ split at the mouth of the cover.  We have secured this with tape to prevent it from opening further.

A beautiful copy of a terrific, well-recorded Jazz LP.

Earl “Fatha” Hines Plays Hits He Missed was recorded direct-to-disk by M&K Realtime Records, where the live performance was cut directly to acetate without first being recorded to tape.

This album, also known by the title of Fatha, has long been sought out by audiophiles as a great example of a well-recorded Jazz album.

This may very well have been pianist Earl Hines’s final recording although he lived until 1983. The concept of this solo LP is quite logical and it is interesting to hear this veteran of the 1920s playing such tunes as “Birdland,” “Misty” and “The Preacher.” But some of these songs are not “hits” he missed such as “Humoresque,” “Ain’t Misbehavin’,” and “Sophisticated Lady”; in fact he recorded those songs previously. Despite him hedging his bets, this is a fine set with Earl Hines showing that he was always in his prime, even 55 years after his recording debut. 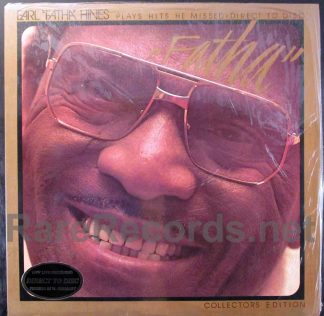