A 1984 Japanese pressing of High ‘n’ Dry by Def Leppard, including the original obi.

Offered for sale is a Japanese pressing of High ‘n’ Dry by Def Leppard, including the original obi.

This “Remix Version” includes remixed versions of “Bringin’ on the Heartbreak” and “Me & My Wine.”

About this copy: This copy of High ‘n’ Dry is a 1984 Vertigo label pressing of an album that was originally released in 1981.

A nice copy of a scarce Def Leppard LP.

The album reached #26 on the U.S. album charts.

Def Leppard’s second album, High ‘N’ Dry, continues in the vein of the anthemic, working-class hard rock of their debut. While still opting for a controlled musical attack and melodies as big-sounding and stadium-ready as possible, the band opens up its arrangements a bit more on High ‘N’ Dry, letting the songs breathe and groove while the rhythm section and guitar riffs play off one another. MTV helped break the album in the U.S. with its heavy rotation of the video for the unabashedly dramatic rock ballad “Bringin’ on the Heartbreak.”

My copy arrived today and all I can say is WOW!  I have been delighted with every purchase and will be back for more. 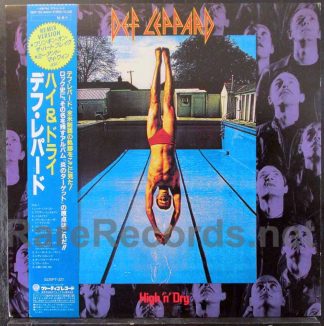