An acetate for the 1972 Renaissance album Prologue

Offered for sale is a genuine stereo Capitol Records acetate for a 1978 reissue of the 1972 album Prologue by Renaissance.

It should be noted that there are many fake acetates for sale on eBay; this one was obtained from someone who received it directly from a Capitol record company employee and is guaranteed to be genuine.

About this copy: The disc is in VG++ condition, with just a few slight scuffs from having been removed from a paper sleeve at some point.  It doesn’t look as if it’s been played more than once or twice..  The surfaces are bright and have no significant marks.  The catalog number SMAS-11116, the date 8-23-78 and the timing are typed in on each side.  This disk is in exceptional condition, especially for an acetate, as they are often found in poor condition.  This one is gorgeous.

This disk was issued without a finished cover, as it was intended for in-house use only.  The cover is a plain white cover with the name of the artist and the title of the album handwritten on it.  There is a small amount of residue on the cover where a price tag has been removed.

If you’re a fan of Renaissance and you’re looking for something extraordinary, this is a great chance to add something unusual to your collection.  It’s likely the only Renaissance album acetate that you’re ever going to see for sale.

Background: After two relatively unsuccessful albums on Island as an offshoot of the Yardbirds, Renaissance underwent a dramatic change, adding singer Annie Haslam, who had a multi-octave range and operatic training.  This version of the band became quite successful during the latter part of the 1970s.  Their first album featuring the new lineup was Prologue, released in 1972.

After the success of Novella in 1977, Capitol reissued the album in 1978.  The disk offered for sale here is a prerelease acetate of the album, cut on a lathe for in-house use.

Acetates are laquer-covered metal disks that must be cut individually using a lathe; they are the first part of the record manufacturing process.  Ordinarily, acetates cut for production use are plated with metal, and stampers are made from them.  Occasionally, acetates are cut for evaluation purposes.  While they may be played like an ordinary record, their soft surfaces do not hold up well to repeated play. 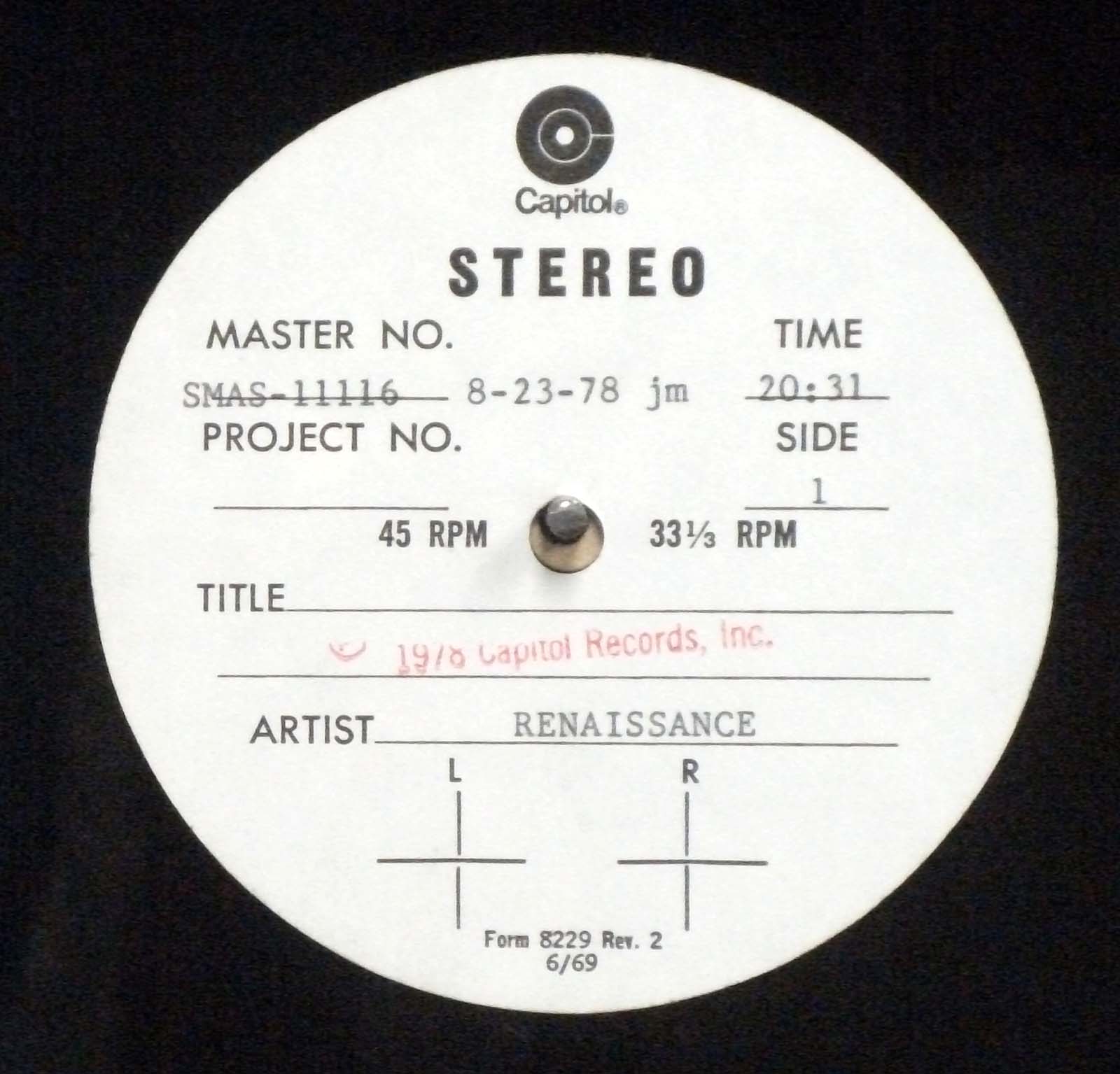