An original Japanese pressing of Comes a Time by Neil Young, including the original obi.

Offered for sale is an original Japanese pressing of Comes a Time by Neil Young, including the original obi.

About this copy: This copy of Comes a Time is a 1978 Japanese pressing on the Reprise label.

The cover is M-, with a small bend in the lower right-hand corner.  The obi is M-.

The lyric insert is M-.

The record is M- and looks like it may have been played once.

A gorgeous copy of a Neil Young LP that is rarely found without cover wear.

Background: Released in 1978, Comes a Time was the ninth studio album by Neil Young.

The album reached #7 on the U.S. album charts.

Six and a half years later, Comes a Time finally was the Neil Young album for the millions of fans who had loved Harvest, an acoustic-based record with country overtones and romantic, autobiographical lyrics, and many of those fans returned to the fold, enough to make Comes a Time Young’s first Top Ten album since Harvest. He signaled the album’s direction with the leadoff track, “Goin’ Back,” and its retrospective theme augmented with an orchestral backup and the deliberate beat familiar from his number one hit “Heart of Gold.” Of course, Young remained sly about this retrenchment. 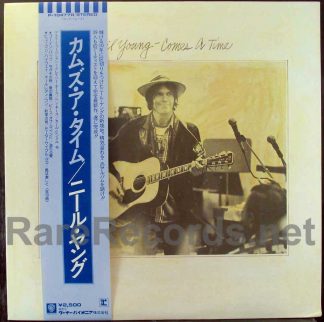