An original copy of the 1959 LP The Crazy Cadillacs by the Cadillacs.

Offered for sale is an original pressing of the 1959 LP The Crazy Cadillacs by the Cadillacs.

About this copy: This copy of The Crazy Cadillacs is an original 1959 issue, on the flat-black Jubille label.

The cover is VG+, with slight ring wear and some wear on the bottom edge.

The disc is VG+ one one side and VG on the other, with a few light marks but no deep or significant scratches.

Background: The Cadillacs were one of the better-selling doo wop groups of the 1950s and early 1960s, and one of the very few to release more than one album.

The Crazy Cadillacs, released in 1957, was the group’s second album and the first to be recorded specifically as an album.

First issues of the LP were on the flat black Jubilee label, followed shortly after release by a change to the black label with a color logo.

Without duplicating anything from their first album (1957’s The Fabulous Cadillacs, actually a collection of sides from various 1954-1957 singles), the Cadillacs’ second LP mixed seven tracks from 1954-1957 45s with five songs that made their first appearance on this long-player. It may not have anything on the order of their classic hit “Speedoo,” but it’s actually a consistent and superior doo wop album, with a few cuts that rate among the group’s best.

You can listen to “My Girl Friend” here: 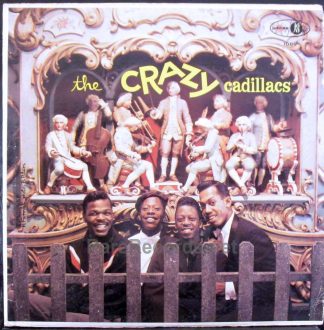