A copy of the Japan-only double album Cugat V. Prado – Kings of Latin by Xavier Cugat and Perez Prado, including the original obi and cheesecake cover.

Offered for sale is a rare Japan-only double album entitled Cugat vs. Prado – Kings of Latin, by Xavier Cugat and Perez Prado, including the original obi.

About this copy: This copy of Cugat vs. Prado – Kings of Latin is an original 1975 Japanese pressing on the Philips label.

The cover is VG++, with no wear, but with moderate foxing, mostly on the back.

The obi is VG++, with some foxing on the back, but no tears.  This double album was issued without an insert, as the information is presented inside the gatefold cover.

A nice copy of a terrific Latin/Jazz compilation.

Background: This unusual Japan-only compilation was released in 1975 and features one disc each by Xavier Cugat and Perez Prado and their orchestras.

The cheesecake cover was undoubtedly added to help sell more copies; this was a common feature among Japanese instrumental albums in the 1960s and 1970s.

Disc one – Perez Prado and his orchestra 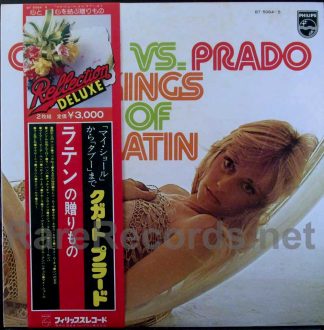