Who – My Generation original Japan LP

A copy of the ultra-rare original 1966 Japanese pressing of My Generation by the Who, featuring a cover used only on this release.

Offered for sale is an original Japanese pressing of My Generation by The Who.

This LP features a cover photo that was unique to the Japanese release and the U.S. track lineup, though in a different order from the U.S. release.

About this copy: This copy of My Generation is an original 1966 Japanese pressing on the Decca label.

The cover is VG++, with a disc impression and a few minor wrinkles.

The obi and lyric insert are missing.  The obi on this LP is so rare that we’ve never even seen a photo of an original one.  The original plastic inner sleeve is included.

The disc is M-, with a very faint sleeve scuff on side one and a couple of spindle marks on the labels.  The record has clearly only been played a couple of times.  Beautiful disc!

A beautiful copy of an ultra-rare Who LP and as nice a copy as you’re ever likely to find.  We’ve only seen three of these in the past 30 years.

Background: Released in 1966, My Generation was the first album by the Who, and the first of four almost-impossibly rare Who LPs to be released in Japan.

For whatever reason, the album was only available for a short time there, and it was never reissued.

My Generation (released as The Who Sings My Generation in the U.S.) is regarded as one of the most significant debut albums in rock history.  While the album failed to make the charts in the United States when released in 1966, the 1965 UK release reached #5 on the UK charts.

The UK version of the album included a track, “I’m a Man,” that was not included on the U.S. or Japanese release (It was replaced by “Instant Party.”)

An explosive debut, and the hardest mod pop recorded by anyone. At the time of its release, it also had the most ferociously powerful guitars and drums yet captured on a rock record. Pete Townshend’s exhilarating chord crunches and guitar distortions threaten to leap off the grooves on “My Generation” and “Out in the Street”; Keith Moon attacks the drums with a lightning, ruthless finesse throughout. … While the execution was sometimes crude, and the songwriting not as sophisticated as it would shortly become, the Who never surpassed the pure energy level of this record. 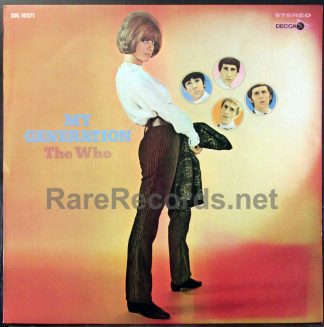