A copy of the rare 1967 Japan-only LP Golden R&B by the Supremes, complete with obi.

Offered for sale is a copy of the rare Japan-only compilation LP, Golden R&B, by the Supremes, complete with the rare original obi.

About this copy: This copy of Golden R&B by the Supremes is an original 1967 Japanese pressing, complete with gatefold cover and the very rare original obi.

(We have removed the obi from the cover for the third photo to make it easier to see how the full cover looks.)

We cannot stress how unusual it is to find a 1960s album from Japan that has the obi intact, as they were almost always discarded by buyers shortly after purchase.

The cover is VG+, with a bit of wear at the edges and corners. The inside of the cover has some foxing, as is common on older Japanese LPs.

The rare obi is VG+, with a few wrinkles, but no tears.  The “hojyuhyo”, or reorder tag, is still attached.

The cover is a gatefold with lyrics and liner notes (in Japanese) inside. As such, the album was issued without a lyric insert.

The disc is VG++, and very close to M-, with just a couple of very faint marks.  The disc has clearly seen very little play.

A beautiful copy of a terrific album, and the only copy of this album we’ve ever seen.

Background: The Supremes took a few tries to hit the charts, but once they did, they became one of the biggest selling acts of the 1960s, with 17 songs reaching the American Top 10 and eleven songs reaching #1.

You can listen to one of those #1 hits, “Love Is Here and Now You’re Gone” here:

The Supremes were also popular in Japan, where their Japanese record company issued a number of compilation albums by the group that were never sold in any other country.

Once such album is Golden R&B, which may have been the first such album, as it was issued in 1967, when the group was still cranking out #1 hits. 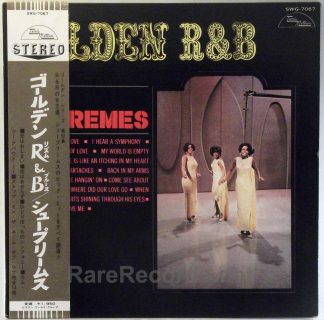