Offered for sale is a limited edition yellow vinyl pressing of Steely Dan’s Aja, released in Canada in 1978.

About this pressing: This yellow vinyl pressing of Aja is an original 1978 issue on the ABC label.

The cover is VG++ with a small dent at the center of the bottom edge and a small saw mark on the lower right hand corner of the cover.

The custom inner sleeve is VG+ with a few wrinkles and a small split at the bottom.
The yellow vinyl disc is M- and looks unplayed.

We don’t know what tapes were used to master this LP, nor do we know who mastered it. It is, however, one of the best-sounding pressings of this LP we’ve ever heard.

While the primary appeal of this pressing will be the fact that it’s pressed on yellow vinyl, it does sound great, and that’s a nice bonus.

The matrix numbers on the disc are:

A gorgeous copy of a terrific record and the nicest preowned copy we’ve ever had for sale.

Background: Steely Dan’s Aja is regarded by many as the band’s best work, and it’s also a popular title among audiophiles. Early pressings are sought out because the master tapes to this (and other) Steely Dan albums were lost sometime in the mid-1980s, and subsequent reissues simply don’t sound as good as earlier pressings.

During the late 1970s, collectors were showing a lot of interest in picture discs and colored vinyl, and record companies around the world issued a number of popular titles in both formats. In Canada, Aja was released on colored vinyl as both red and yellow vinyl pressings in 1978.

This week, all 1990s LPs are on sale!
Gift Cards Now Available!

My copy arrived today and all I can say is WOW!  I have been delighted with every purchase and will be back for more. 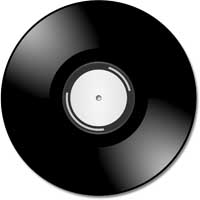