An original U.S. stereo pressing of the 1962 LP Twistin’ the Night Away by Sam Cooke.

Offered for sale is an original U.S. stereo pressing of the 1962 LP Twistin’ the Night Away by Sam Cooke.

About this copy: This copy of Twistin’ the Night Away is a 1962 stereo first pressing, with 1S stampers on both sides of the black RCA label.

The cover is VG. There’s no general wear, but there is wear at the edges and corners and a small tear in the upper right hand corner where a price sticker has been removed.

The disc is quite clean, and looks M-, with one or two faint sleeve scuffs.  A beautiful disc that has clearly had little play.

Background: Twistin’ the Night Away was Sam Cooke’s eighth album, and his fifth for RCA.  The album reached #74 on the album charts, helped by the title track, which reached #9 on the singles charts.

Allmusic.com gave Twistin’ the Night Away a 3 star review:

This was one of Cooke’s more successful LPs, only his second ever to chart (the first was his 1957 debut long-player), and from here on, all of his albums would sell in serious numbers. Twistin’ the Night Away remains one of Cooke’s most accessible records, despite the fact that it was a “twist” album, aimed by the producers at cashing in on that craze, and Cooke was shoehorned into doing numbers like “Camptown Twist,” “Twistin’ in the Kitchen With Dinah,” and “Twistin’ in the Old Town,” as well as his version of Hank Ballard’s “The Twist.” … One of the great dance albums of its period, but a brilliant soul album as well, which is why it holds up 40 years later. 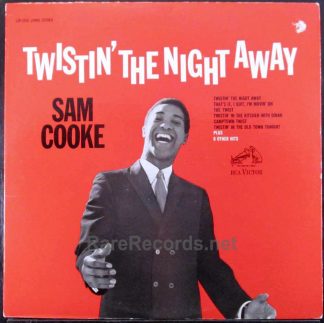