A rare mispressed brown vinyl pressing of Beggar’s Banquet by the Rolling Stones, issued in the Netherlands.

Offered for sale is a rare limited edition mispressed copy of Beggar’s Banquet by the Rolling Stones, issued in 1978 in Holland, pressed on pinkish-brown vinyl, rather than the intended white vinyl.  This is either a “mistake” pressing or something pressed by an employee for personal use.

This copy, however, is not white, but is instead a sort of pink-brown color, rather similar to the color of chocolate milk.

When pressing white vinyl records, other colors sometimes get mixed in by mistake, and that seems to be what happened with this copy, though most copies like this are white with streaks or spots.  This copy is a fairly uniform non-white color.

We’ve had many copies of this album over the years, but every other copy we’ve ever seen was pure white in color.  This one isn’t even close to that.

The cover is VG++, with just a bit of wear at the corners and a couple of spots of foxing.  The cover retains its original shrink wrap.

The disc is VG++, and is very close to M-, with just a couple of faint marks.  It appears to have had little, if any, play.

A rare variation of a terrific album.

Background:  Beggar’s Banquet released in 1968, was the Rolling Stones return to form after dabbling with psychedelia with the previous year’s Their Satanic Majesties Request.  The album reached #5 on the U.S. charts and #3 on the UK charts, helped by the single, “Street Fighting Man.”

The original cover was intended to show graffiti on the wall of a bathroom stall, but that was nixed by the record company.  The band then changed the cover to an all white cover resembling an invitation to a party or some other event.  The album was well-reviewed, and Allmusic.com gave it five stars:

The Stones forsook psychedelic experimentation to return to their blues roots on this celebrated album, which was immediately acclaimed as one of their landmark achievements.  At the time, though, the approach was still fresh, and the lyrical bite of most of the material ensured Beggars Banquet’s place as one of the top blues-based rock records of all time.

Beggar’s Banquet was one of a number of Rolling Stones albums that were released as a colored vinyl limited edition in the Netherlands in 1978, along with Let It Bleed, Through the Past Darkly, Their Satanic Majesties Request, and Get Your Ya Yas Out. 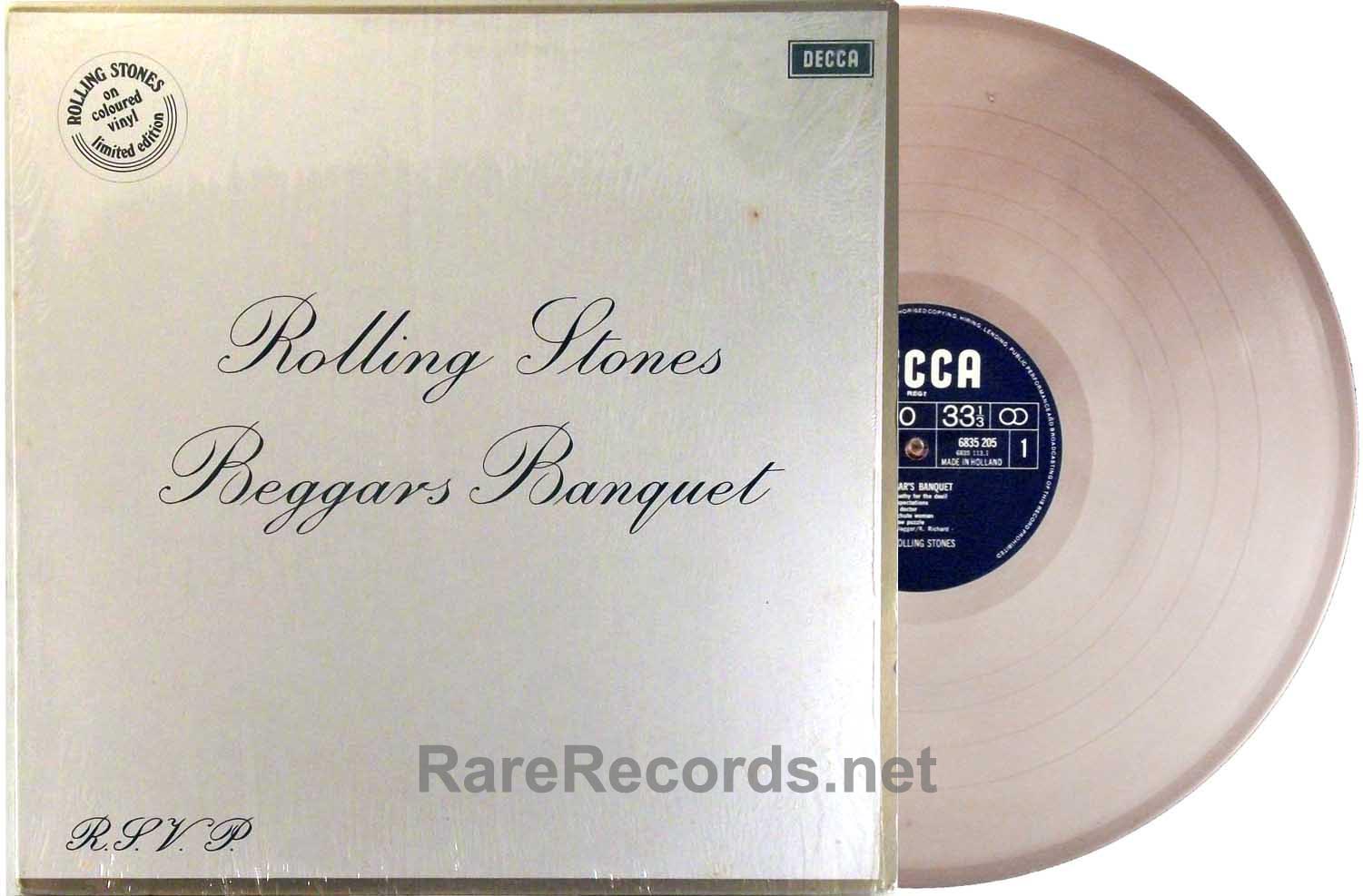