A Classic Records 5 LP 45 RPM reissue of The Reiner Sound, by Fritz Reiner and the Chicago Symphony Orchestra

Offered for sale is a copy of the 5 LP, 180 gram, 45 RPM Classic Records reissue of The Reiner Sound, performed by Fritz Reiner and the Chicago Symphony Orchestra, originally issued in 1960 by RCA Records as LSC-2340.

About this copy: This copy of The Reiner Sound was released in a limited edition, 45 RPM issue, pressed on 5 single-sided, 180 gram discs for optimum sound quality. This is an early pressing; each disc in the set comes in a printed cover that duplicates the cover used on the original RCA release, and the label features the “shaded dog” RCA label art that was used on the original pressing. 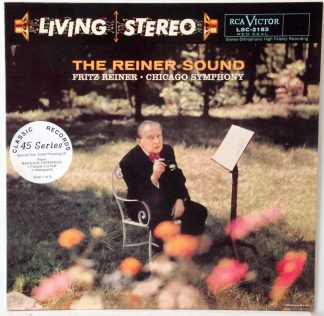