Offered for sale is a test pressing of an excerpt (“The Wedding of Kije”) of Prokofiev – Lieutenant Kije by Fritz Reiner and the Chicago Symphony, released by Classic Records cut at 78 RPM on 180 gram vinyl.

About this copy: This is a 12″ single containing a 6-7 minute excerpt of “The Wedding of Kije” from Prokofieff’s Lt Kije, as recorded in 1958 by Fritz Reiner and the Chicago Symphony Orchestra. This single-sided disc was pressed on 180 gram vinyl and plays at 78 RPM.

The disc was issued in a plain white cover, stamped with the date “Sep 7 1994” and the catalog number “LSC 2150 A3 78.” Side one of the disc is a standard RTI test pressing label with the same information stamped on it as on the cover. The B side label is blank, as is the B side of the record itself.

Record and cover are in M- condition. The record appears to have had little, if any, play.

While this is only a portion of the complete Lt. Kije suite, we must admit that it sounds terrific.

Background: There are numerous recordings by Fritz Reiner and the Chicago Symphony that are highly regarded by fans of classical music as well as audiophiles. One of the most appreciated titles is the 1958 recording of Prokofiev’s Lt. Kije, and Stravinsky’s Song of the Nightengale. Originally issued by RCA, the album was in print for decades, with each pressing sounding worse than the one that preceded it, due to tape deterioration. The album has been listed on the recommended list by the music publication The Absolute Sound for years, and for good reason – it’s an amazing recording.

Classic Records reissued a series of RCA classical titles by making new two track masters from the original three track tapes, and the results were spectacular. The label pressed the album at both 33 1/3 and 45 RPM speeds, and at both 180 gram and 200 gram vinyl weights. The 200 gram pressings were issued on high-quality Quiex SV-P vinyl.

In the mid-1990s, Classic Records founder Michael Hobson had mastering engineer Bernie Grundman cut at least four different titles at 78 RPM as a test to see how they would compare in sound quality to their 45 RPM and 33 1/3 RPM pressings. Due to the limitations of the 78 RPM format, particularly the short playing time, these recordings were not considered for commercial release, but were instead used only for in-house testing. It is estimated that no more than 20 copies were pressed of any one title.

This week, all Instrumental LPs are on sale!
Gift Cards Now Available!

Thank you very much for getting it out the door speedily. Worked out perfectly.  Looking forward to shopping with you guys again! 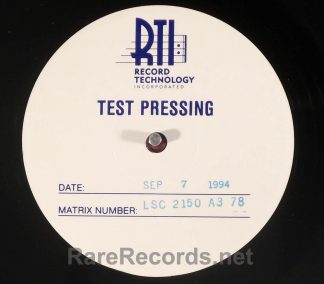