Offered for sale is a copy of the 1984 LP Ray Charles Friendship Radio Show, issued only as a promotional item.

About this copy:  This copy of Ray Charles Friendship Radio Show is an original 1984 promo copy, with stock labels with “Demonstration – not for sale” print.

The cover is a plain white cover with a hype sticker attached.  The cover is VG, with a few stains and a couple of bent corners.

A nice copy of a scarce Ray Charles LP.

Background: Friendship, released in 1984, represented Ray Charles’ return to country music for the first time in more than 20 years.  The album featured a number of duets between Charles and a number of country performers, including Hank Williams Jr., Willie Nelson, Chet Atkins, George Jones, and Johnny Cash.

While the album reached #75 on the Billboard charts, it reached #1 on the country charts.

To promote the album, Columbia Records released this radio show, which contains all ten tracks from the album along with spoken introductions by Charles. 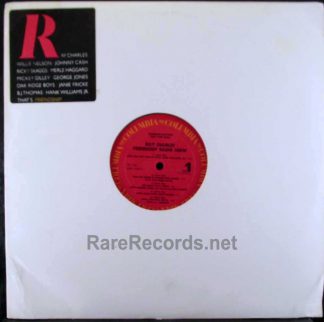