An original 1959 U.S. stereo pressing of Ray Charles at Newport, pressed on the green Atlantic label.

Offered for sale is a rare original U.S. stereo pressing of the 1959 LP Ray Charles at Newport by Ray Charles.

About this copy: This copy of Ray Charles at Newport is an original stereo issue on the green label that Atlantic only used from 1958-1960.

The cover is VG+, with a bit of wear on the lamination and some foxing on the back cover.  There are no tears or holes.  As with many early Atlantic stereo titles, this album has a mono cover with an embossed “STEREO DISC” stamp on the front.

A beautiful copy of an album that rarely turns up in this condition.

Background: Ray Charles at Newport was released just months after his appearance at the Newport Jazz Festival in 1958.

Atlantic’s first stereo LPs were used on a green label that was nearly identical to the black label they were using at the time for their mono releases.  This label was only in use from 1958-1960, and all pressings on that label are quite rare.

For his appearance at the Newport Jazz Festival on July 5, 1958, Charles pulled out all the stops, performing raucous versions of “The Right Time,” “I Got a Woman,” and “Talkin’ ‘Bout You.” 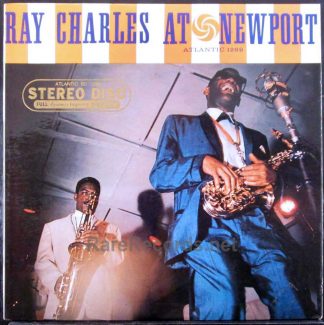