An original red vinyl 1970 Japanese pressing of Just for Love by Quicksilver Messenger Service, including the original obi.

Offered for sale is an original red vinyl Japanese pressing of Just For Love by Quicksilver Messenger Service, including the original obi.

About this copy: This copy of Just For Love is a 1970 Japanese first pressing on the green Capitol label, pressed on “Everclean” red vinyl.

The cover is VG++, with trace wear at the corners.  The obi is VG+, with a repaired tear and a few wrinkles.  The “hojyuhyo,” or reorder tag, is still attached.

The disc is VG++, with a couple of faint sleeve marks and a few spindle marks on the labels.  The record has clearly only been played a few times.  Beautiful disc!

Background:  Released in 1970, Just For Love and the follow-up LP, What About Me? were recorded at the same sessions.  The album reached #27 on the U.S. album charts and featured the band’s biggest hit, “Fresh Air,” which reached #49 on the singles charts, but got a lot of FM airplay.

With the return of Gary Duncan and the recording debut of founder Dino Valenti, Just for Love, Quicksilver’s fourth album, marked their debut as the band they were intended to be. … On Just for Love, Quicksilver finally was Valenti’s backup group (he wrote all but one of the songs), and while this gave them greater coherence and accessibility, as well as their only Top 50 single in “Fresh Air,” it also made them less the boogie band they had been. 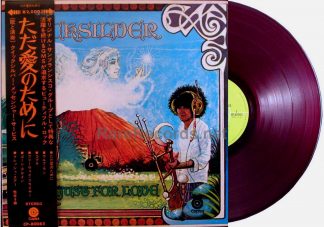