Offered for sale is an original Japanese pressing of The Game by Queen, including the original obi.

About this copy: This copy of The Game is an original 1980 Japanese pressing on the Elektra label.

The disc is M-.  There are a number of spindle marks on the labels, but no marks at all on the vinyl.  Clean disc!

A nice copy of a scarce Queen LP.

Background: Released in 1980, The Game was the eighth studio album by Queen.

The LP reached #1 on both the U.S. and UK charts, helped by the single, “Another One Bites the Dust.

Queen had long been one of the biggest bands in the world by 1980’s The Game, but this album was the first time they made a glossy, unabashed pop album, one that was designed to sound exactly like its time. They might be posed in leather jackets on the cover, but they hardly sound tough or menacing — they rarely rock, at least not in the gonzo fashion that’s long been their trademark. Gone are the bombastic orchestras of guitars and with them the charging, relentless rhythms that kept Queen grounded even at their grandest moments….. But the very fact that it does showcase a band that’s turned away from rock and toward pop means that for some Queen fans, it marks the end of the road, and despite the album’s charms, it’s easy to see why. 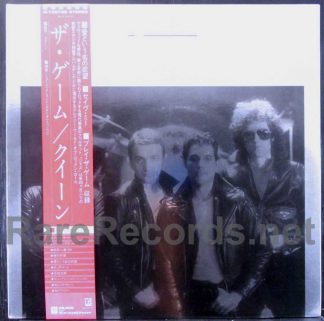