Offered for sale is a limited edition clear vinyl pressing of the 2 LP set Lightbulb Sun by Porcupine Tree, issued in 2018 on Kscope records.

About this copy: This copy of Lightbulb Sun is a 2018 clear vinyl limited edition pressing of an LP that was originally released in 2000.

This set was pressed on both black and clear vinyl; the clear vinyl editions were limited and sold out as preorders.

This LP is new and unplayed; the album was not sealed at the factory, but was instead shipped in a resealable bag.  We received this copy directly from the record company and haven’t opened it.

Background: Lightbulb Sun, released in 2000, was the fifth studio album by Porcupine Tree.  The album reached #161 on the UK charts, but did not chart in the U.S.

Some older fans looked askance at Lightbulb Sun, feeling it was verging on overt commercialism (and admittedly, the near power ballad solo on “Where We Would Be” is a bit odd!). Then again, given Wilson’s own explorations of avant-garde pop with No-Man, who’s to say why a slightly more radio-friendly stance can’t work? “Shesmovedon” may have been a single, but there’s no question who wrote and performed it — the elegant cascade of backing vocals on the chorus shows that much. Certainly Wilson hasn’t turned into Max Martin or anything — it’s still very much Porcupine Tree, in its lyrical turns of phrase and general sense of exploration. 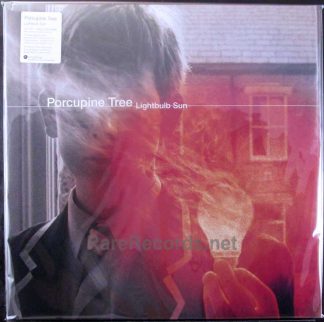