A rare 1970 Japanese pressing of The Piper at the Gates of Dawn by Pink Floyd, complete with original obi.

Offered for sale is a rare 1970 Japanese black vinyl pressing of The Piper at the Gates of Dawn, complete with original obi and lyric insert.

About this copy: This copy of The Piper at the Gates of Dawn is a rare 1970 Japanese second pressing on black vinyl, with the pink Rock Now obi and lyric insert.

The cover is VG++, and very close to M-, with a bit of minor wear on the corners.  The back cover has the correct ¥2000 price printed in the lower right hand corner, though a sticker for a higher price of ¥2200 has been placed over it.

The obi is original and is the correct obi for the 1970 issue, with a ¥2000  price at the top, though like the cover, it has a ¥2200 sticker over the original price.  The obi is VG+, with a few minor wrinkles and a small tear at the bottom edge.  The “hojyuhyo,” or reorder tag, is still attached.

The original rice paper inner sleeve is included.  The order form for the Rock Now! tote bag is missing.

The disc is M- with a faint inaudible mark through “Interstellar Overdrive.”  There are a few spindle marks on each label, but the record clearly has been well cared for and has had very little play.

A beautiful copy of a terrific record.  The 1970 pressing of this LP is, for whatever reason, the hardest Japanese issue of this LP to find, even on black vinyl.

Background: The Piper at the Gates of Dawn, released in 1967, was the first LP from Pink Floyd and the only album by the band to predominantly feature founding member Syd Barrett.

In Japan, the album was issued on six different occasions, and each was available only for a short period of time:

The 1967 and 1970 issues were available on red vinyl, though nearly all copies of the 1970 release were black.  The red version is one of the world’s rarest Pink Floyd LPs.

The Japanese pressing of The Piper at the Gates of Dawn features the UK track lineup, including “Flaming,” “Astronomy Domine,” and “Bike,” which were all removed from the LP for the U.S. release.  Unlike the UK and U.S. issues, all Japanese pressings of the album have been in stereo.

The Japanese pressing also includes an extra track, “See Emily Play,” which had previously been released as a single.

Allmusic.com gave The Piper at the Gates of Dawn a 5 star review:

The Piper at the Gates of Dawn successfully captures both sides of psychedelic experimentation — the pleasures of expanding one’s mind and perception, and an underlying threat of mental disorder and even lunacy; this duality makes Piper all the more compelling in light of Barrett’s subsequent breakdown, and ranks it as one of the best psychedelic albums of all time. 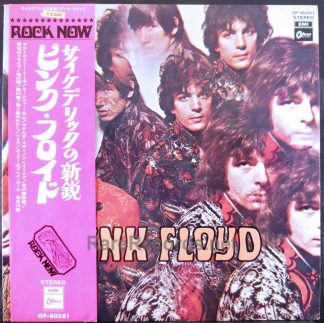