An original red vinyl Japanese pressing of Pass Me By by Peggy Lee, including the original obi.

Offered for sale is an original Japanese pressing of the 1964 LP Pass Me By by Peggy Lee, pressed on red vinyl and including the ultra-rare original obi.

About this copy: This copy of Pass Me By is an original 1965 Japanese pressing, pressed on red “Everclean” vinyl and including the original lyric insert and the original blue and white obi, which is nearly always missing.

The cover and disc and obi are M-.  The original envelope-style paper inner sleeve is included.

A gorgeous copy of a scarce LP.

Background:  In the Name of Love features tracks arranged by Dave Grusin and Shorty Rogers.

Allmusic had this to say about Pass Me By:

Capitol aimed songs from Pass Me By at several different markets, and the effect is a scattershot LP with several nuggets but no real cohesion. First up is the delightfully tossed-off popcorn tune “Sneakin’ Up on You,” but it’s followed by the title track, a queasy strike-up-the-band march which surprisingly reached the charts. “Dear Heart” leans toward the countrypolitan sound (it would’ve fit much better as a vehicle for Charlie Rich), and the Beatles cover “A Hard Day’s Night” wasn’t a good match at all; Lee strains to hit the lower notes, and sounds tentative singing the lyrics. While her vocals are on the weak side from a technical standpoint, Lee’s interpretive powers are mostly intact, and her flair on “Sneakin’ Up on You” makes it a natural for one of those swinging novelties often heard on ’60s compilations.

You can listen to “Pass Me By” here: 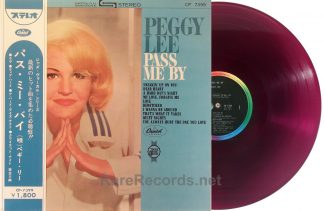