An original 1974 Japanese pressing of Paul Simon in Concert/Live Rhymin’ by Paul Simon, including the original cap obi.

Offered for sale is an original Japanese pressing of Paul Simon in Concert/Live Rhymin’ by Paul Simon, including the original “cap” obi.

About this copy: This copy of Paul Simon in Concert/Live Rhymin’ is an original 1974 Japanese pressing on the white/orange CBS label.

The disc is M-, though it does have a faint inaudible scuff through tracks 2-3 on side one.

A beautiful copy of an album that’s hard to find complete.

One thing Simon & Garfunkel never did much of was tour, so a Paul Simon solo tour, following two commercially successful solo albums, was one more way for Simon to distance himself from the duo and, simultaneously, by performing songs like “The Boxer” and “Homeward Bound,” to reclaim his songwriting catalog. … Though the album was, like most live albums, artistically redundant (there was nothing new, and none of the live versions improved upon the studio ones), it served as a career statement and it had a marketing function, buying the relatively slow-working Simon time between new studio releases. 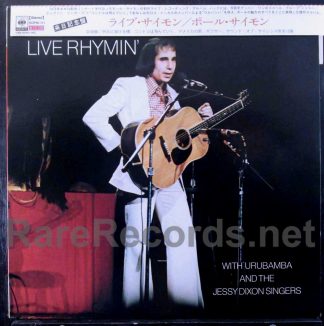