A 1974 Japanese pressing of More of the Monkees, with an alternate cover and including the rare cap obi.

Offered for sale is a Japanese copy of More of the Monkees, featuring an alternate cover and the nearly-always-missing “cap” obi.

About this copy: This copy of More of the Monkees is a 1974 Japanese pressing of an album that was originally released in 1967.

This pressing has a unique cover that was used only on the 1974 reissue.

The cover is M-.  The cap obi is M-, though the “hojyuhyo,” or reorder tag, is missing.

The insert and custom inner sleeve is missing.

The disc is VG++, with a few light sleeve scuffs.

A nice copy of a scarce Monkees LP.

Background: Released in 1967, More of the Monkees was the second album by the Monkees.  The album reached #1 on the U.S. album charts, helped by the single “I’m a Believer.”

Allmusic.com gave More of the Monkees a 4 star review:

The Monkees second album More of the Monkees lived up to its title. It was more successful commercially, spending an amazing 70 weeks on the Billboard charts and ultimately becoming the 12th biggest selling album of all time. It had more producers and writers involved since big-shots like Carole King and Gerry Goffin, Jeff Barry and Neil Sedaka, as well as up-and-comers like Neil Diamond all grabbed for a piece of the pie after Tommy Boyce and Bobby Hart, the men who made the debut album such a smash, were elbowed out by music supervisor Don Kirshner. …The tracks on More of the Monkees (with the exception of the aforementioned “Your Auntie Grizelda ” and the sickly sweet “The Day We Fell in Love,” which regrettably introduces the smarmy side of Davy Jones) stand up to the work of any other pop band operating in 1967. Real or fabricated, the Monkees rate with any pop band of their era and More of the Monkees solidifies that position. 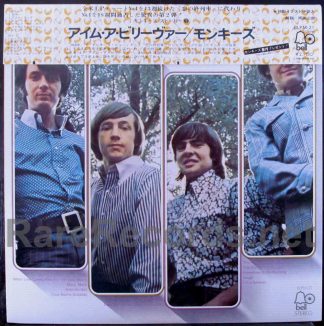 You're viewing: Monkees – More of the Monkees 1974 Japan LP with alternate cover and cap obi $99.00
Add to cart