A rare Japanese reissue of Headquarters by the Monkees, featuring an unusual alternate cover and the original cap obi.

Offered for sale is a rare Japanese pressing of Headquarters by the Monkees, featuring the “flowers” alternate cover and including the nearly-always-missing “cap” obi.

About this copy: This copy of Headquarters is a 1974 Japanese pressing of an album that was originally released in 1967.

For some reason, this cover, which was supposed to feature the band against a plain white background, has been augmented with a background of flowers!

The custom inner sleeve and insert are M-.

The disc is VG+ on side one, with a couple of light scuffs.  Side two is VG+, with a fingernail mark through a couple of tracks.

A nice copy of a very rare Monkees LP.

Background: Released in 1967, Headquarters was the third album by the Monkees, and the band’s only album on which they played their own instruments on all tracks.

After the release of More of the Monkees, on which the band had little involvement beyond providing vocals and a couple Mike Nesmith-composed songs, the pre-fab four decided to take control of their recording destiny. After a well-timed fist through the wall of a hotel suite and many fevered negotiations, music supervisor Don Kirschner was out and the band hit the studio by themselves. With the help of producer Chip Douglas, the band spent some time learning how to be a band (as documented on the Headquarters Sessions box set) and set about recording what turned out to be a dynamic, exciting, and impressive album. Headquarters doesn’t contain any of the group’s biggest hits, but it does have some of their best songs.

You can listen to “Randy Scouse Git” here: 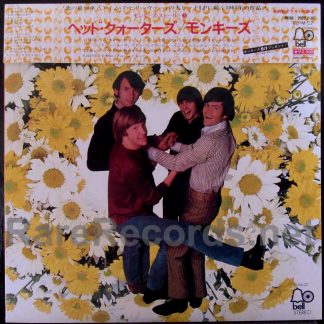