A Japanese 12″ single of Thriller by Michael Jackson, including the original obi.

Offered for sale is a Japanese 12″ single of “Thriller” by Michael Jackson, including the original obi.

This title was one of three 12″ singles from the Thriller LP to be released in Japan.

About this copy: This copy of “Thriller” is a Japanese 12″ single with picture cover and obi, released in 1984 on the Epic label.

This disc plays at 45 RPM and features the LP version of “Thriller” on side one and an instrumental version on side two.

The cover is M- and is still in the original shrink wrap.  The obi is M-.  This disc was issued without an insert.

The disc is M- and looks unplayed.  Beautiful copy!

A nice copy of a great-sounding 12″ single.

Background: Released in 1984, “Thriller” was the seventh single to be released from Michael Jackson’s 1982 LP of the same name.

The song peaked at #4 on the U.S. singles chart. 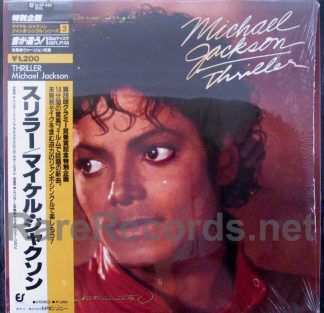